Senckenberg researcher Dr. Torben Riehl and his colleague Dr. Bart De Smet from Ghent University in Belgium have named a previously unknown species of deep-sea crustacean in honor of the band Metallica. The deep-sea scientist from Frankfurt suggested the name to pay tribute to his rock idols. At the same time, the researchers want to raise awareness. This creature has been discovered in the abyss of the northern Pacific while conducting environmental baseline studies as part of a broader environmental impact assessment for a potential future nodule extraction project. The study is being published today in the scientific journal “PeerJ”.

Metallica are one of the most successful acts ever, having sold over 125 million albums and filling arenas and stadiums since the 1980s — now a new species of deep-sea crustacean is carrying their name. “The powerful music of Metallica has accompanied me the majority of my life. Songs such as ‘Master of Puppets’ and ‘One’ are outstanding masterpieces in rock history and I am thrilled to be able to give something back to the band by naming a new species after them!” says deep-sea scientist Dr. Torben Riehl of the Senckenberg Research Institute and Natural History Museum Frankfurt, Germany.

The newly discovered worm-like creature Macrostylis metallicola inhabits the Clarion Clipperton Zone, situated roughly between Hawaii and Mexico. It is adapted to depths of 4,132–5,055 meters and over 400 times the pressure of our atmosphere. Only up to 6.5 mm long it dwells in absolute darkness without eyes and is colorless. Its environment consists of manganese nodules –concretions of metallic elements several millions of years old that can range in size from very small to approximately the size of an orange. These contain valuable compounds, such as cobalt, copper, manganese, nickel and rare-earth elements. “The scientific Latin suffix ‘-cola‘ translates into ‘inhabiting’ and hence refers to the habitat of the Metallica species.” explains Riehl and adds: “Because of the wealth of resources in this part of the deep seafloor it may soon be mined for minerals needed to meet the growing demand for raw materials.” Understanding the baseline environmental conditions is important for developing science-based management plans and mitigation strategies to ensure biodiversity as well as ecosystem health and function are maintained.
By naming the new species after Metallica the marine biologist intends to achieve two aims that are truly dear to his heart: honor the band and raise environmental awareness. Dr. Riehl continues, “The continuously rising demand for metals due to population growth, urbanization and clean-energy technology leads to resource exploration and exploitation even in, until now, scientifically unknown and hard-to-reach parts of this world, such as the deep sea. Very few people are aware that the vast and largely unexplored depths of the oceans harbor bizarre and undiscovered creatures — much like our new Metallica crustacean. These species are part of the Earth system on which we all depend. The deep sea plays a role in this system being linked to the climate as well as the food webs of the oceans. Even if we cannot stop mining from happening, we have to make sure that manganese-nodule exploitation will be conducted in a sustainable manner by implementing proper management plans and protected areas designed to conserve biodiversity and ecosystem functioning.” 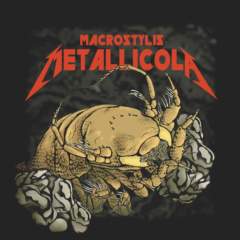 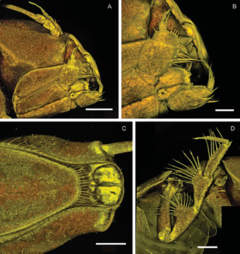 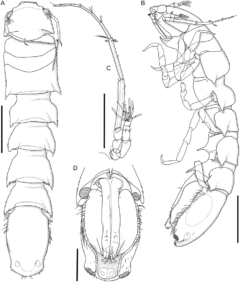