Water is becoming increasingly scarce – by 2050 about half a billion people are likely to be subject to water-stress, increasing the pressure to intervene in water systems.

In 2009, Johan Rockström (Stockholm Resilience Centre) and 28 international scientists published the article A safe operating space for humanity, in which they identified nine processes that regulate the stability and resilience of the Earth system. They proposed quantitative planetary boundaries, whose crossing would increase the risk of generating large-scale abrupt or irreversible environmental changes.

The stratospheric ozone layer in the atmosphere filters out ultraviolet (UV) radiation from the sun. If this layer decreases, increasing amounts of UV radiation will reach ground level. This can cause a higher incidence of skin cancer in humans as well as damage to terrestrial and marine biological systems.

The appearance of the Antarctic ozone hole was proof that increased concentrations of anthropogenic ozone-depleting chemical substances, interacting with polar stratospheric clouds, had passed a threshold and moved the Antarctic stratosphere into a new regime. Fortunately, because of the actions taken as a result of the Montreal Protocol, we appear to be on the path that will allow us to stay within this boundary.

The Millennium Ecosystem Assessment of 2005 concluded that changes to ecosystems due to human activities were more rapid in the past 50 years than at any time in human history, increasing the risks of abrupt and irreversible changes. The main drivers of change are the demand for food, water, and natural resources, causing severe biodiversity loss and leading to changes in ecosystem services. These drivers are either steady, showing no evidence of declining over time, or are increasing in intensity.

The current high rates of ecosystem damage and extinction can be slowed by efforts to protect the integrity of living systems (the biosphere), enhancing habitat, and improving connectivity between ecosystems while maintaining the high agricultural productivity that humanity needs. Further research is underway to improve the availability of reliable data for use as the ‘control variables’ for this boundary.

3. Chemical pollution and the release of novel entities

Emissions of toxic and long-lived substances such as synthetic organic pollutants, heavy metal compounds and radioactive materials represent some of the key human-driven changes to the planetary environment. These compounds can have potentially irreversible effects on living organisms and on the physical environment (by affecting atmospheric processes and climate). Even when the uptake and bioaccumulation of chemical pollution is at sub-lethal levels for organisms, the effects of reduced fertility and the potential of permanent genetic damage can have severe effects on ecosystems far removed from the source of the pollution.

For example, persistent organic compounds have caused dramatic reductions in bird populations and impaired reproduction and development in marine mammals. There are many examples of additive and synergic effects from these compounds, but these are still poorly understood scientifically.  At present, we are unable to quantify a single chemical pollution boundary, although the risk of crossing Earth system thresholds is considered sufficiently well-defined for it to be included in the list as a priority for precautionary action and for further research.

The Millennium Ecosystem Assessment of 2005 concluded that changes to ecosystems due to human activities were more rapid in the past 50 years than at any time in human history, increasing the risks of abrupt and irreversible changes.

Recent evidence suggests that the Earth, now passing 390 ppmv CO2 in the atmosphere, has already transgressed the planetary boundary and is approaching several Earth system thresholds. We have reached a point at which the loss of summer polar sea-ice is almost certainly irreversible.

This is one example of a well-defined threshold above which rapid physical feedback mechanisms can drive the Earth system into a much warmer state with sea levels metres higher than present. The weakening or reversal of terrestrial carbon sinks, for example through the on-going destruction of the world’s rainforests, is another potential tipping point, where climate-carbon cycle feedbacks accelerate Earth’s warming and intensify the climate impacts. A major question is how long we can remain over this boundary before large, irreversible changes become unavoidable.

Around a quarter of the CO2 that humanity emits into the atmosphere is ultimately dissolved in the oceans. Here it forms carbonic acid, altering ocean chemistry and decreasing the pH of the surface water. This increased acidity reduces the amount of available carbonate ions, an essential ‘building block’ used by many marine species for shell and skeleton formation. Beyond a threshold concentration, this rising acidity makes it hard for organisms such as corals and some shellfish and plankton species to grow and survive.

Losses of these species would change the structure and dynamics of ocean ecosystems and could potentially lead to drastic reductions in fish stocks. Compared to pre-industrial times, surface ocean acidity has already increased by 30 percent.  Unlike most other human impacts on the marine environment, which are often local in scale, the ocean acidification boundary has ramifications for the whole planet. It is also an example of how tightly interconnected the boundaries are, since atmospheric CO2 concentration is the underlying controlling variable for both the climate and the ocean acidification boundaries, although they are defined in terms of different Earth system thresholds.

We have reached a point at which the loss of summer polar sea-ice is almost certainly irreversible.

The freshwater cycle is strongly affected by climate change and its boundary is closely linked to the climate boundary, yet human pressure is now the dominant driving force determining the functioning and distribution of global freshwater systems. The consequences of human modification of water bodies include both global-scale river flow changes and shifts in vapour flows arising from land use change.

These shifts in the hydrological system can be abrupt and irreversible. Water is becoming increasingly scarce – by 2050 about half a billion people are likely to be subject to water-stress, increasing the pressure to intervene in water systems.  A water boundary related to consumptive freshwater use and environmental flow requirements has been proposed to maintain the overall resilience of the Earth system and to avoid the risk of ‘cascading’ local and regional thresholds.

Land is converted to human use all over the planet. Forests, grasslands, wetlands and other vegetation types have primarily been converted to agricultural land. This land-use change is one driving force behind the serious reductions in biodiversity, and it has impacts on water flows and on the biogeochemical cycling of carbon, nitrogen and phosphorus and other important elements.

While each incident of land cover change occurs on a local scale, the aggregated impacts can have consequences for Earth system processes on a global scale. A boundary for human changes to land systems needs to reflect not just the absolute quantity of land, but also its function, quality and spatial distribution. Forests play a particularly important role in controlling the linked dynamics of land use and climate, and is the focus of the boundary for land system change.

8. Nitrogen and phosphorus flows to the biosphere and oceans

The biogeochemical cycles of nitrogen and phosphorus have been radically changed by humans as a result of many industrial and agricultural processes. Nitrogen and phosphorus are both essential elements for plant growth, so fertilizer production and application is the main concern. Human activities now convert more atmospheric nitrogen into reactive forms than all of the Earth’s terrestrial processes combined. Much of this new reactive nitrogen is emitted to the atmosphere in various forms rather than taken up by crops. When it is rained out, it pollutes waterways and coastal zones or accumulates in the terrestrial biosphere.

Similarly, a relatively small proportion of phosphorus fertilizers applied to food production systems is taken up by plants; much of the phosphorus mobilized by humans also ends up in aquatic systems. These can become oxygen-starved as bacteria consume the blooms of algae that grow in response to the high nutrient supply. A significant fraction of the applied nitrogen and phosphorus makes its way to the sea, and can push marine and aquatic systems across ecological thresholds of their own. One regional-scale example of this effect is the decline in the shrimp catch in the Gulf of Mexico’s ‘dead zone’ caused by fertilizer transported in rivers from the US Midwest.

An atmospheric aerosol planetary boundary was proposed primarily because of the influence of aerosols on Earth’s climate system. Through their interaction with water vapour, aerosols play a critically important role in the hydrological cycle affecting cloud formation and global-scale and regional patterns of atmospheric circulation, such as the monsoon systems in tropical regions. They also have a direct effect on climate, by changing how much solar radiation is reflected or absorbed in the atmosphere.

Humans change the aerosol loading by emitting atmospheric pollution (many pollutant gases condense into droplets and particles), and also through land-use change that increases the release of dust and smoke into the air. Shifts in climate regimes and monsoon systems have already been seen in highly polluted environments, giving a quantifiable regional measure for an aerosol boundary. A further reason for an aerosol boundary is that aerosols have adverse effects on many living organisms.

Inhaling highly polluted air causes roughly 800,000 people to die prematurely each year. The toxicological and ecological effects of aerosols may thus relate to other Earth system thresholds. However, the behaviour of aerosols in the atmosphere is extremely complex, depending on their chemical composition and their geographical location and height in the atmosphere. While many relationships between aerosols, climate and ecosystems are well established, many causal links are yet to be determined. 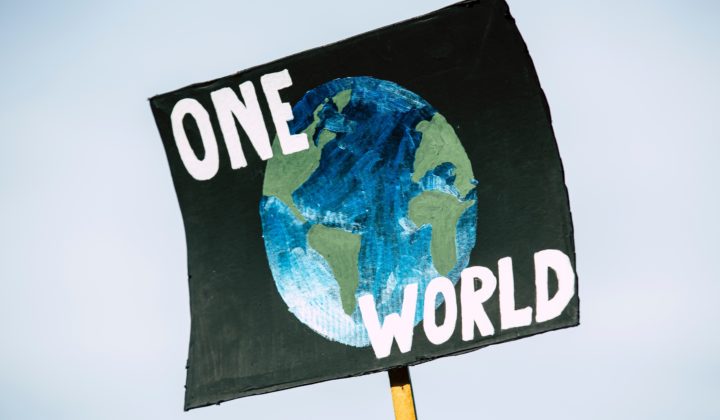 The report covers a comprehensive description about the state of global ecosystems and their diversity and answers important key questions. 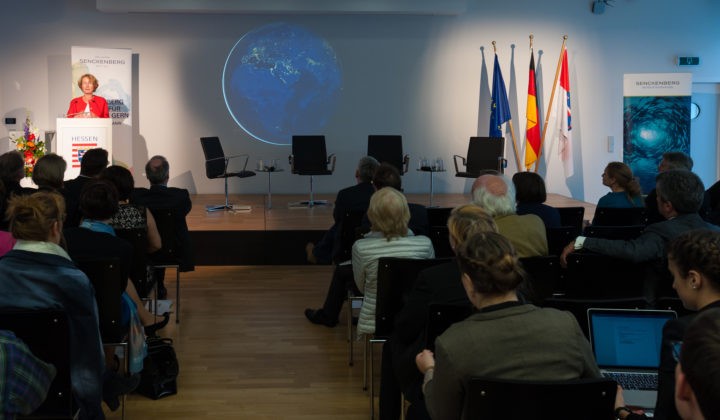 Those who want to bring science into the realm of politics and society face new challenges. The director of the Biodiversity and Climate Research Center and Senckenberg board member Katrin Böhning­-Gaese identifies what these challenges are and how Senckenberg will approach them constructively.