His research interest focuses on the understanding of ecosystem dynamics and the change in climate in the course of the earth‘s history up to the present. He is parti­cularly interested in how environmental cri­ses affect society and how society deals with these crises. Eronen is a founding member of BIOS, an inde­pendent research unit dealing with socio-ecological changes and their impact on so­ciety in Finland, and he is currently also active there. He is also a core member of the Scientific Consensus on Maintaining Humanity‘s Life Support Systems, and member of the NECLIME (Neogene Climate Evolution in Eurasia) and ETE (Evolution of terrestrial Environments) Associations.

From 2006 to 2015, Jussi Eronen visited Senckenberg three times for extended stays (with a Marie Curie Fellowship, a scholar­ship from the Alexander von Humboldt Foundation, and other funding) and worked intensively with Volker Mosbrugger as well as several SBiK-F scientists. For Jussi Ero­nen, the cooperation with Senckenberg was ground-breaking. It significantly influenced his research as a postdoc, since he was able to realize important projects with Sencken­berg scientists regarding paleoclimate mo­deling.

Jussi Eronen has fond memories of his time in Frankfurt: his best memories are connected to soccer and German beer. In the summer of 2006, the Finnish man expe­rienced the World Cup in Germany during one of the hottest Junes on record, and he was only able to survive with wheat beer and “Radler;” and after the World Cup final in the summer of 2014, he went to the bars in the city with colleagues and friends to ce­lebrate.

Jussi’s advice to researchers from all over the world who want to come to Sencken­berg in the future: a thorough and forward-looking time plan and timely contact with co-operation partners and administrative staff in order to overcome bureaucratic hurdles. Then nothing should stand in the way of a successful, interesting and enjoya­ble research stay at Senckenberg.

Alumni-Portrait: A look into the past

Gabriel de Souza Ferreira, PhD student at the University of Sao Paulo, Brazil, is an evolutionary biologist researching the evolution of organisms over time. His focus is on reptiles and especially on turtles. In cooperation with PD Dr. Ingmar Werneburg at the Senckenberg Center for Human Evolution and Palaeoenvironment (HEP-Tübingen) Gabriel investigates macroevolutionary processes of these fascinating animals on fossil material and with the aid of a diverse portfolio of state-of-the-art functional morphological and phylogenetic methods. In the course of his PhD he was at the HEP from December 2016 to November 2017.

For Gabriel, the cooperation with Senckenberg is invaluable, as it gives him access to internationally renowned expertise and modern infrastructure. His time in Tübingen made a lasting impression on him and gave his research a new direction. Especially the internationality of the working group of Prof. Dr. Madelaine Böhme, in which he carried out parts of his doctorate, is valuable to him. Gabriel also recommends that other scientists seek cooperation with Senckenberg, since for him Senckenberg is a very diverse, well-structured and productive research institution.

Alumni-Portrait: Research at the “End of the World”

Marina Malyutina works at the „End of the World“ – she is a scientist at the National Scientific Center of Marine Biology in Vladivostok, Russia, and is an expert on the taxonomy of deep-sea isopods. The crustaceans provide many important findings about this largely unexplored habitat. Since 2010 Marina has cooperated with Prof. Dr. Angelika Brandt (Senckenberg Research Institute and Natural History Museum Frankfurt) and participated in several Russian-German deep-sea expeditions that have brought forth invaluable biological materials, which is now largely stored in the collections of the Department of Marine Zoology at the Senckenberg. During a stay in April 2018, sponsored by the research alumni network Senckenberg, Marina had the opportunity to work on materials from the last Kuram-Bio II expedition taken from a depth of 9580 meters in the KurilKamchatka-Trench. Her conclusion: „I greatly appreciate the Senckenberg collections and my stay was very pleasant and productive, not least because of the excellent organization on site and the renovated premises in the Arthur-von-Weinberg-House“. The long-term collaboration will continue in the future, because there is still much to discover in the deep sea! 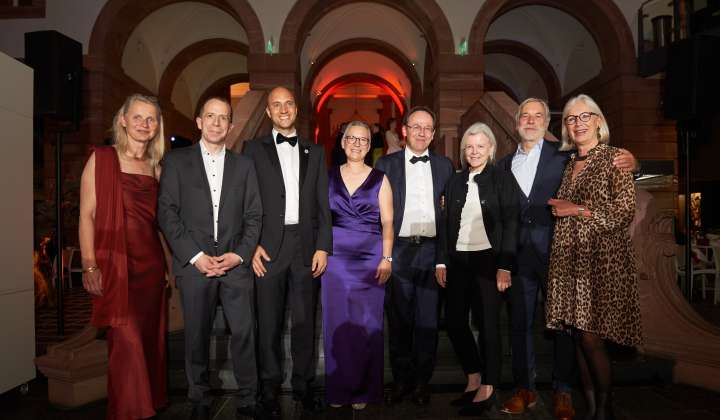 The Senckenberg – Leibniz Institution for Biodiversity and Earth System Research (SGN) awards several different prizes and honors. Find out more about them here!