Plant fossils are valuable indicators of palaeoenvironmental conditions existing during earlier Quaternary climate phases. In Central Europe, plant remains are preserved mainly in warm stage deposits. Previous warm stages are considered important potential analogues for the prognosis of global warming effects on nature and society. Plant imprints, preserved in travertine deposits of Thuringia are among the most important archives of Quaternary macrofloras in Europe.

They can be correlated directly with numerous palaeozoological findings preserved in the sediment matrix itself. In lake sediments, mainly fossil seeds and fruits from plants of aquatic and shore line habitats as well as from adjacent terrestrial plant communities are preserved, representing a broad range of former habitats.

In the frame of an interdisciplinary project, palaeobotanical studies are currently carried out on Early Pleistocene lacustrine deposits in Voigtstedt/Hackelsberg, Central Germany. The reconstruction of interglacial local palaeo-vegetation and environmental conditions bases on the thus obtained fossil species spectra. Within the respective time horizon, the results are correlated with regional and supra-regional findings.

During Quaternary cold stages, arctic climatic conditions existed even in the mid-latitudes, and tundra or tundra-steppe like vegetation expanded along the peripheral zones of the inland ice sheets. The Arctic is, by definition, the region beyond the polar tree line, which thus constitutes the southern border of arctic vegetation and climate conditions. The course of the tree line during earlier Quaternary climate stages is therefore of particular importance as it defines crucial climatic thresholds.

Plant macro-fossils of woody plants are found north of their modern distribution limits in arctic permafrost deposits of the last interglacial and the Early Holocene. These remains provide a clear indication of warm conditions in these high-latitudes during Quaternary warm stages and the persistence of woody plants during cold stages. Our research is examining the distributional changes of key species, such as Dahurian larch in Siberia and white fir in Alaska as well as birch and alder species that are able to form both shrub and tree forms.

The Impact of Coastline Shifts, Climate and Herbivory on Arctic Vegetation during the Quaternary

Global sea-level during the Quaternary fluctuated by as much as 130 m. The majority of the unglaciated and hence vegetated terrestrial Arctic is situated adjacent to extensive shelf areas that are today covered by epicontinental seas; during sea low-stands these areas formed part of a large continuous landmass that connected Eurasia and North America.

The dramatic shifts in the coast line, resulting from eustatic sea level fluctuations, had a substantial impact on climate and vegetation in the high latitudes as a result of the changing influence of maritime air masses. The coast line dynamics resulted also in the formation of migration routes or barriers for plants and animals. Pleistocene large mammals exerted an additional influence on arctic vegetation by grazing and trampling.

Studies of plant remains preserved in arctic permafrost deposits indicate a greater diversity in both vegetation and habitats, which included even steppe occurrences in high latitudes during the Pleistocene. The reconstruction of the floral shift at the onset of the current warm stage about 11,000 years ago in comparison to former Quaternary climate events yields an insight into the causes of the mammoth fauna decline and the substantial loss of biotic diversity in the terrestrial Arctic during the Holocene. 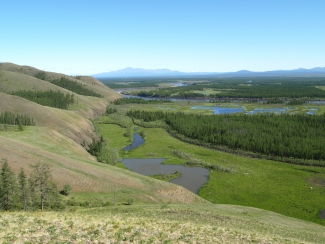 The project aims at contributing to the ongoing debate on the type of vegetation present at that time and place: an extensive productive, cold-adapted grassland or a patchy mosaic of tundra-steppe in response to local environmental conditions such as topography, exposition, disturbances and soil moisture as it is found today.