From 14th to 18th of October 2016 soil and moss samples were taken again from a total of 17 sites (see map) of the Harz. All samples were selected using an expedition Berlese device (see photo). In the foreground of these investigations stood 2 bolder fields and sites in older deciduous forests. The determination of the whole material will start in January 2017.

Contribution to the knowledge of Collembola from the Canary Islands

In the seventies and eighties of the last century Arne Fjellberg und Willem N. Ellis collected springtails within many locations of the Canary Islands. They mainly took mosses of rocks, litter layers or netted from vegetation (e. g. meadows). A part of these collected springtails samples Dr. Fjellberg gave kindly our section Apterygota. These undetermined materials were and will currently determine.

Continuation of long-term studies on Collembola fauna in bogs

Samples of the Dubring bog from 2012 were determiniert. These samples resulted in altogether 50 species. Besides of many hydrophilic species three tyrphobiotic species were found (Ceratophysella scotica (Carpenter & Evans, 1899), Neelides minutus (Folsom, 1901) and Pachyotoma crassicauda (Tullberg, 1871)).

Furthermore the examination of extensive samples from the Sernitz bog project of Dr. Ricarda Lehmitz (Section Oribatida ) started. With Neelides minutes and Pachyotoma crassicauda also two tyrphobiotic species were already recorded. Above all 4 collecting dates were analyzed (July, October 2013, November 2015 and April 2016). Within these samples 49 species were found (7419 specimens).

The forest reserve ‘Locheiche’ is a part of the national park ‘Edersee-Kellerwald’. This region is characterized by old large-scale beech forests. The soil and moss samples (more than 100 of nearly 50cm3 volumes) were taken in March, May and September 2009 within a grid-based sampling design of the Locheiche woodland. 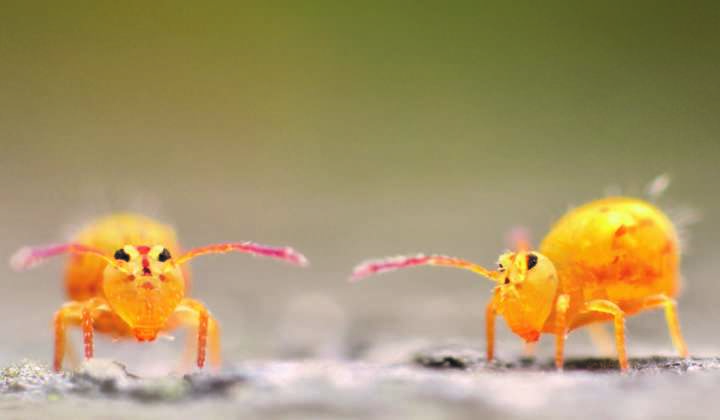 The collection includes springtails (Collembola) and other apterygote insects; it is the most extensive collection of the entire institute.