We want to record and understand the biodiversity of crustaceans. Basic morphological research on organisms, their structures and characteristics is of great importance for this, but genetic data also provide important information. This provides us with insights into the origination, distribution patterns and ecology of the various crustacean groups.

The scientific activity of the Crustacea Section has two geographical focuses, the deep sea and the seas of the polar regions. There, the Senckenberg crustacean researchers decipher the evolution, ecology and biogeography of peracarid crustaceans (Peracarida), especially the isopods. The basis for this research is taxonomy.

Data collection is the most important part of research into the deep sea and its crustaceans. Essentially, we obtain this data in three ways: Collection trips, museum exchange, and online databases.

In part, Senckenberg crustacean researchers collect their research data themselves by collecting the underlying objects. They regularly take part in deep-sea expeditions, some of which they organise and lead themselves. Among the most recent expeditions are the Larsen-C expedition in 2019 and KuramBio II (2016). These expeditions are usually several weeks long voyages on large research vessels, using special sampling equipment such as the large box corer, multiple corer or the epibenthic sledge, which in its today most commonly used configurations was developed by Senckenberg researchers of the Crustacea section as well as the DZMB.

A second important pillar of data collection is the exchange with other natural history museums. Through loans of collection material or research trips to other such museums, scientific collections, some of which are very old, are still used for cutting-edge research. Some of them still provide important findings decades after their collection.

Finally, the Senckenberg crustacean researchers use public databases, such as GenBank and OBIS, to make data available (mobilise) and to “mine” them for further analysis based on data sets made available by other scientists. In particular, Dr. Hanieh Saeedi uses this ‘form of data collection’ in her BENEFICIAL project to produce biogeographical analyses and make predictions about the effects of climate change on the marine fauna.

As a fundamental basis for further studies, taxonomy is one of the main topics of the Crustacean section. Every year this foundation is broadened at Senckenberg by the discovery and description of new species. The scientific collection serves as a living archive in the sense of transparent and sustainable research – guest researchers from all over the world use it for their taxonomic work. Descriptive and identifying taxonomy is an elementary component or basic requirement for most of the projects of the Crustacean Section. A particularly taxonomically oriented project is the revision (systematic revision) of the isopod family Macrostylidae.

The recording and registration of species communities of specific regions in the deep sea and polar seas is one of the most important fields of work of the Crustaceans Section. For this purpose, we work in collaborative projects, such as KuramBio and Larsen-C , with taxonomic specialists for other animal groups from all over the world. Such census projects target the entire faunal community of a certain region, if possible, and thus form the basis for determining future changes, which may be related, for example, to climate change or pollution. Faunistic research is thus the basis for biomonitoring (faunal change over time) and biogeography.

The KuramBio project currently being worked on is one of a whole series of research projects in the Northwest Pacific (SoJaBio, KuramBio, SokhoBio, KuramBio II), whose deep-sea fauna it is inventorying. In the near future it will be supplemented by another project, AleutBio. This will add the Aleutian Trench and the Bering Sea to the faunistic surveys already carried out.

The Larsen-C Benthos project is surveying the seabed fauna of the Antarctic continental shelf. In the area east of the Antarctic Peninsula known as the Prince Gustav Channel, two ice shelves (glaciers floating on the sea) broke off in 1995, changing this marine area. In this project, Senckenberg researchers, together with colleagues from the British Antarctic Survey, are investigating the effects of this change on the seabed fauna in the sea floor formerly covered by the glacier.

The proliferation of marine organisms and communities of organisms is linked to certain environmental factors. For example, their distribution may be linked to oceanic water bodies, temperature, salinity or a limited depth horizon. Biogeography deals with these environmental preferences of species and communities and their resulting geographical distribution. If the biogeography of a particular region is known and supported by a good knowledge of species, it is possible to predict changes in the distribution of organisms and interpret them based on knowledge of their preferences. This is the aim of the BENEFICIAL project, which studies and models the changes in faunas in the transition zone between the Northwest Pacific and the Arctic. Thus, BENEFICIAL ties in seamlessly with the SoJaBio, KuramBio, SokhoBio and KuramBio II research projects in the Northwest Pacific.

In the Crustacea section, we also deal with the phylogenetic origins of deep-sea crustaceans and the question of which factors can lead to the formation of species in the deep sea. For this evolutionary biological work we use the methods of phylogenetics (family tree reconstruction) and population genetics.

In view of the (supposed) large-scale monotony of the deep-sea habitat (especially in the abyss), our ideas about the evolutionary origins of deep-sea fauna are still very limited. For various groups of organisms it has been postulated that they migrate into the abyssal from shallower sea areas where they originate. For marine isopods, many representatives occur exclusively in the abyssal, which seems to contradict the above-mentioned assumption. We are therefore investigating whether deep-sea species form in these animals, how the deep-sea fauna is phylogenetically related to the fauna of shallow seas, and what factors play a role in this.

For example, in the KuramBio project, we are investigating the influence that alleged barriers and gradients, such as deep-sea trenches, have on the distribution of species and the exchange between populations, and whether they can contribute to speciation by reducing gene flow. Such studies are carried out on the cosmopolitan deep-sea isopod family Macrostylidae, among others.

Habitat exploration at the deep seafloor

Staff members of the Senckenberg Crustacea Section are involved in mapping the seafloor in various marine regions. In the past, many assumptions have been made about the structure and diversity of the seafloor in the deep sea. Especially in the abyssal, it is assumed that quite homogeneous and sediment covered plains make up the major part. These are divided into basins by mountain ridges and the continental slopes and deep-sea trenches. But basically it must be said that only a very small part of them has been explored in detail.

Only recently, a study was published as part of the KuramBio II project, which remeasured the depth of the Kurile-Kamchatka trench. Our Frankfurt researchers worked together with colleagues from the Senckenberg DZMB, the Alfred Wegener Institute and the HafenCity University Hamburg.

In cooperation with GEOMAR, our Crustacean researchers are also developing a novel method of remote sensing to distinguish between different seabed types with the help of remote sensing. This will make it possible in the future to make precise assumptions about different habitats at depths of over 5000 m.

Microplastics in the deep sea

In addition to organismic research and habitat exploration, staff of the Crustacea Section are investigating the importance of hadal marine zones (all marine areas deeper than 6500 m) for the long-term fate of microplastics in the sea. Following on from KuramBio II, microplastics from the sediments of the Kuril Kamchatka Trench (Northwest Pacific) will be identified in cooperation with the Alfred Wegener Institute. The Deep-MiPoll project is thus one of the first to address the problem of increasing pollution of the deepest marine areas. 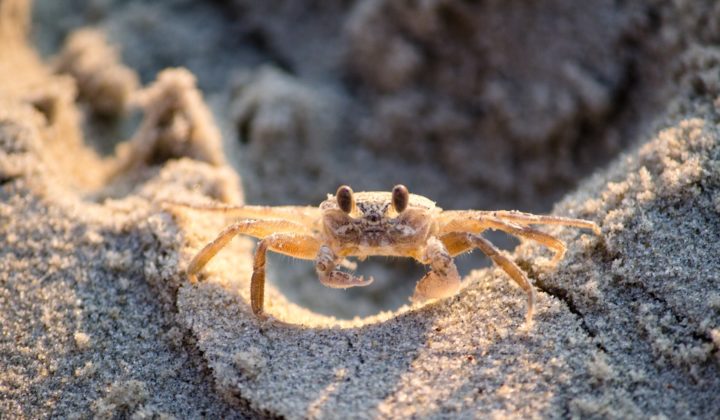 The Crustacea collection (except ostracods, see for that group Division for Paleontology and Historical Geology I) currently comprises about 48,000 catalogued lots, consisting of about 480,000 individuals. 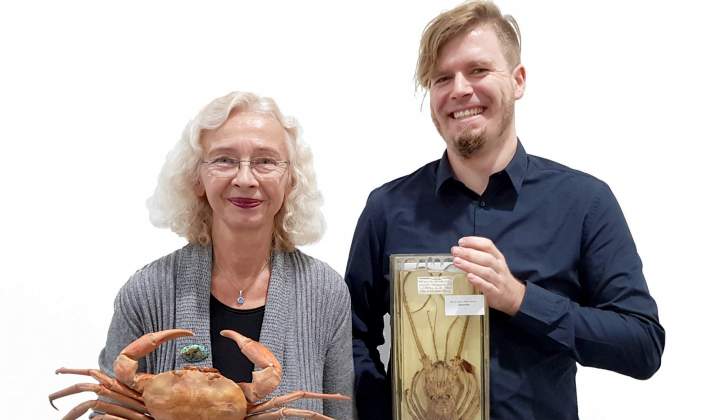 Prof. Dr. Angelika Brandt is the head of the Section Crustacea.