The plathyhelminths, annelids, and echinoderms represent valuable collections including numerous type specimens. The metadata of all collections have been transferred to the database SeSam/Aquila with financial support from the Walter & Erika Datz-Foundation and the German Research Foundation (DFG; Fi 433/12-1), and are available for online research. Research of the section is focused on the taxonomy, systematics, morphology, and biogeography of Polychaeta.

The Polychaeta form a group of the phylum Annelida and comprise with its approximately 10000 currently known species one of the most diverse marine animal taxa besides Crustacea and Mollusca. They occur in great diversity in all marine habitats from the intertidal down to the deep-sea, from seagrass meadows to hot vents. Polychaetes do not only show a wide variety of morphological adaptations to their habitat and mode of life, they are also able to cope with advertent living conditions in such extreme habitats as hot vents and cold seeps. These habitats are characterized by high temperature and dissolved toxic substances like sulfur and heavy metals. In suitable habitats, polychaetes often occur in large densities producing important biomass, especially in soft sediments, e.g. Arenicola marina at our North Sea coast.

Polychaetes are among the most common marine animals and therefore an important element of the marine food web. Many of them live on detritus, thus recycling nutrients, while they are preyed upon by fish, other invertebrates, and even birds, e.g. on tidal flats. They also play an important role in bioturbation of the sediment, as bioindicators, fouling species on ships, and harbor facilities, as neozoa, i.e. species distributed by man, and as pests in oyster farms. They are the subject of physiological and developmental research. Last but not least polychaetes grown in aquacultures are of economic importance as bait for fishing. In the beginning of the 90’s, aquaculture of polychaetes in Maine (USA) produced an annual value of ca. $3,5 million and thus represented an important income for fisheries in this region next to lobster, clams, and fish.

Research on systematics and diversity of polychaetes is of basic importance not only for systematics itself, but also for other fields of research such as ecology and conservation. Moreover, polychaetes play an important role in the deep-sea, a global habitat that has received much attention during recent years.

Besides the curation of the above-mentioned collections, the section has taken over a number of other institutional obligations, like the technical and organizational responsibility for the scanning electron microscope.

The Section Marine Invertebrates II was founded in 1971. As its founding head Dr. Gotthard Richter was appointed, who was the head of the section ‘Marine Biology’ at Senckenberg’s marine institute in Wilhelmshaven. During the years 1964-1968 he was responsible for the founding of the Laboratory for Ecology of the Stazione Zoologica (Neapel) on the Island of Ischia in the Mediterranean Sea. Gotthard Richter’s research focused on an ecologically rather than a systematically defined group of animals: the pelagic Mollusca (excl. Cephalopoda), studying not only taxonomy but also zoogeography, ecology, and functional morphology.

Following Gotthard Richter’s retirement in 1990, Dr. Dieter Fiege was appointed head of the section in August 1990. This change also brought along newly defined tasks and a new focus of research. Curatorial responsibility for a large number of collections of marine invertebrates was transferred from the section Marine Evertebraten I to Marine Evertebraten II and the main field of research became the marine bristle worms (Polychaeta), a major group among the segmented worms (Annelida).

As a necessary tool for this research, a large number of books and reprints on all aspects of research on Polychaeta has been accumulated. The section library includes also the polychaeta libraries of Dr. Gesa Hartmann-Schröder (Hamburg) and Prof. Dr. Volker Storch (Heidelberg), which they kindly donated to Dieter Fiege. Together with numerous old books on loan from the Senckenberg Library, the section maintains one of the best libraries on polychaeta.

In 1990 the collection of Polychaeta was still rather small, since there had never before been a polychaeta-specialist working at the Senckenberg Museum. However, through participation in numerous expeditions and projects, polychaetes from various geographic areas were – and still are – collected and the collection is growing rapidly.

Research in the section is focused on taxonomy, systematics, morphology and zoogeography of Polychaeta , especially on Aphroditoidea, Glyceridae , Magelonidae and Serpulidae. 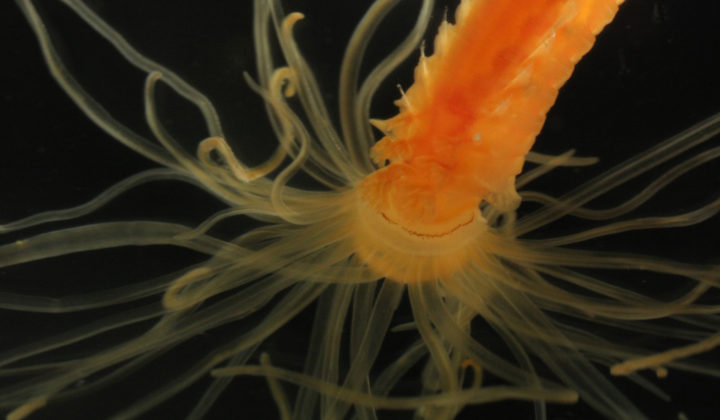 Bristle worms ( Polychaeta ) together with the earth worms and leeches constitute the phylum Annelida or ringed worms. The oldest fossil records of bristle worms date back to the middle Cambrian (520 to 500 million years ago).

Dr. Dieter Fiege is the head of the Section Marine Invertebrates II.