Together with colleagues from Belgium and the USA, Senckenberg scientist Gerald Mayr described a new fossil owl species. The skeleton of Primoptynx poliotauros is the oldest fossil of an owl preserved in such a state of completeness. The discovery provides unique insights into the lifestyle of the earliest owls. Unlike modern owls, the large extinct owl presumably did not kill its prey with its beak but with its talons, similar to goshawks and eagles. The study will be published today in the “Journal of Vertebrate Paleontology.”

Discoveries from the early stages of owl evolution are exceedingly rare. An approximately 60-million-year-old leg bone is the oldest fossil that can be assigned to an owl. “Other owls from this time period are also only known on the basis of individual bones and fragments. Therefore, I was especially pleased when I received a largely complete owl skeleton from the North American Willwood Formation for study, which my colleague and the study’s co-author, Philip Gingerich, had discovered 30 years ago,” explains Dr. Gerald Mayr of the Senckenberg Research Institute and Natural History Museum in Frankfurt, Germany.

The newly described animal belongs to a previously unknown, very large species of fossil owl. Except for the skull, all major bones of the 55-million-year-old bird are preserved. “The fossil owl was about the size of a modern Snowy Owl. However, it is clearly distinguished from all extant species by the different size of its talons. While in present-day owls the talons on all toes are approximately the same size, the newly described species Primoptynx poliotauros has noticeably enlarged talons on its hind toe and second toe,” explains Mayr.

These toe proportions are known from modern diurnal raptors, e.g., eagles and goshawks. These birds, which are not closely related to owls, pierce their prey with their sharp talons. Mayr and his colleagues therefore assume that the extinct owl also used its feet to kill its prey. “By contrast, present-day owls use their beak to kill prey items – thus, it appears that the lifestyle of this extinct owl clearly differed from that of its modern relatives,” adds the ornithologist from Frankfurt.

Moreover, the new discovery reveals a high level of diversity among the owls of the early Eocene in North America – from the small species Eostrix gulottai, measuring a mere 12 centimeters, to the newly discovered, roughly 60-centimeter-tall bird.

“It is not clear why owls changed their hunting technique in the course of their evolution. However, we assume that it may be related to the spread of diurnal birds of prey in the late Eocene and early Oligocene, approximately 34 million years ago. Competition for prey with diurnal birds of prey may have triggered feeding specializations in owls, possibly also leading to these charismatic birds’ nocturnal habits,” adds Mayr in closing. 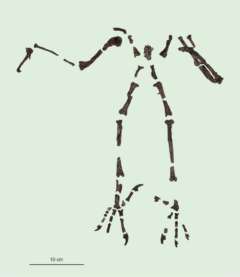 Except for the skull, the 55-million-year-old skeleton of the newly described owl species has been preserved almost in its entirety. 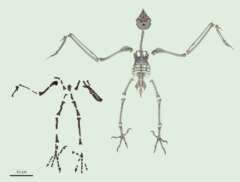 Similar to present-day diurnal birds of prey (right), the talons on the hind toe and the second toe of Primoptynx poliotauros (left) are noticeably larger than the talons on the third and fourth toe. In modern owls (center) all four talons are roughly the same size. Photo: Senckenberg/Tränkner