Together with colleagues from the “Charles Darwin Foundation” and an international team, Senckenberg scientist Raffael Ernst studied the role of Fowler’s snouted treefrog Scinax quinquefasciatus in the food web of the Galápagos archipelago. The frog was introduced to the islands at the end of the 1990s and has spread there ever since. In their study, published today in the scientific journal “NeoBiota,” the scientists show that the introduced frogs have no natural predators that could significantly decimate their population. The team therefore recommends the continued monitoring of the frog’s impact on the endemic island fauna.

“I have taken pains to verify this assertion, and have found it true that frogs, toads, and newts are absent from most oceanic islands” – thus states Charles Darwin in his well-known work “On the Origin of Species.” For a long time, this observation by the famous naturalist also held true for the Galápagos Islands, which are inextricably linked to his name. “This only changed with the arrival of Fowler’s snouted treefrog Scinax quinquefasciatus on the archipelago in 1997 or 1998,” explains Dr. habil. Raffael Ernst of the Senckenberg Natural History Collections in Dresden, and he continues, “In our study, we examined the interactions of this newcomer with the local, primarily endemic fauna on Galápagos.”

Ernst and his colleagues were curious to find out what role this 33-to-38-millimeter-long frog plays within the island fauna’s food web. “You might call it a study of ‘eat or get eaten’,” adds Ernst. To this end, the researchers examined the stomachs of 228 frogs they collected during an expedition in 2017. “In total, we were able to identify eleven different groups of invertebrates in the frogs’ stomachs. At 60 percent, butterflies predominated among the prey animals; in addition, we also found remains of cockroaches, arachnids, and grasshoppers,” explains Ernst, and he adds, “The frogs do not show any specific food preference – they simply eat what is most common locally.”

In a second step, the team examined whose menu the frogs might be on, and they hit paydirt with the islands’ endemic diving beetle  Thermonectus basillarus galapagoensis. “The beetle larvae also feed on the frogs’ tadpoles. We wanted to know whether this might lead to a natural regulation of the frog’s population,” explains Ernst. To answer this question, the scientists conducted controlled predator-prey experiments. These show that the beetle larvae are usually already ‘sated’ before they have completely consumed the offered tadpoles. “This indicates that the beetles will not be able to sustainably limit the population of this invasive frog species. Therefore, the frog’s expansion and its impact on the ecosystem should be carefully monitored in the future,” adds Ernst in closing. 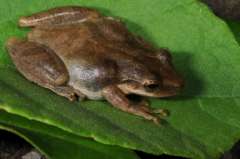 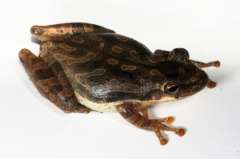 The 33-to-38-millimeter-long frog has no natural predators on the islands. Photo: Senckenberg/Ernst