An Italian slug conquers the World

Invasive species often cause serious economic problems, but they can also serve as a useful test-bed for theories of natural, slower range expansions. Based on analyses of genetic variation, Senckenberg researchers and an Australian colleague have investigated the origin, routes of colonisation, and rate of spread of the invasive slug Deroceras invadens. Their results can be compared against historical records of when this species first turned up around the world. The study was recently published in the Journal of Molluscan Studies.

The “tramp slug” Deroceras invadens is typically brown and about 3 cm long when adult. Although easiest to find under flower pots and rubbish, it can also be a pest of crops and pasture, and may invade natural habitats. “The species was first noticed in 1930, in England, and has since become abundant in many places worldwide, but it was only in 2011 that our research group showed that it was a distinct species deserving its own name”, explains John Hutchinson from the Senckenberg Museum of Natural History Görlitz. “We were interested in where the slug originally came from, the routes by which it had spread, and how much of its genetic diversity the colonising animals had retained.”

For this purpose the Görlitz scientists sequenced the DNA of 380 slugs and analysed data from 317 populations, from New Zealand to Norway to Vancouver, and even from remote oceanic islands such as Tristan da Cunha. Hutchinson says “Our data show conclusively that the original range was centred on southern Italy. That is where genetic diversity is much the highest and where one still finds the natural pattern of adjacent populations being genetically more similar than more distant ones.” Outside of Italy just a few genetic variants predominate, although the decades since their arrival has been sufficient for a number of new mutations to have arisen. “Interestingly, some of the commonest genetic variants in Europe have not made it to the USA or Australia, suggesting that these countries’ strict import controls do work to stop repeated colonisations”, observes the Görlitz researcher.

The article reviews the diverse methodologies of 41 other studies that similarly used genetic data to investigate invasions of terrestrial slugs and snails. Comparing the DNA sequences from different populations can not only reveal their origins but also date the species’ expansion. But, unexpectedly, some standard methods failed to detect the undeniable dramatic population expansion of Deroceras invadens over the last century. Of particularly broad significance is that one genetic analysis that did detect the expansion placed it much too far into the past. Hutchinson says, “We believe the solution to this paradox is that rates of evolution appear slower when measured over longer time intervals; so the standard rates that have been calibrated using events thousands of years ago are inappropriate for a recent population expansion”. This should affect our interpretation of the demographic histories of many invasive species. 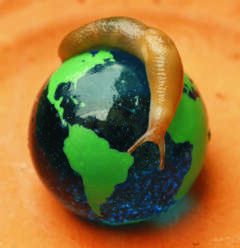 The slug Deroceras invadens was first noticed in 1930, in England, and has since spread to many countries worldwide. 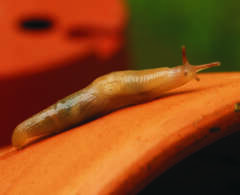 This invasive slug species is often found under plant pots.