The asteroid that likely caused dinosaur extinction 66 million years ago triggered strong global cooling and a massive bloom of algae, causing mass extinction also in marine ecosystems. This is the result of a new study from scientists of the Potsdam Institute for Climate Impact Research (PIK) and the Senckenberg Biodiversity and Climate Research Centre. The researchers simulated the ocean productivity before and after the asteroid impact – and found a brief global algal bloom peaking at a productivity seven times higher than in the pre-impact ocean. Since the algae likely produced toxins, their increase could have contributed to the extinction of species in the ocean.

“The impact of a large asteroid near Chicxulub, Mexico, is increasingly recognised as the trigger of the dinosaur extinction, causing global darkness and a pronounced cooling,” explains Dr. Julia Brugger, lead author of the study published in the Geophysical Research Letters and now at the Senckenberg Biodiversity and Climate Research Centre Frankfurt (SBiK-F). “However, the links between this impact and the changes in the marine biosphere are still not fully understood. For the first time, using an enhanced Earth-system model that can simulate how the ocean biosphere reacts to changes in climate and nutrient supply, we were now able to show that the asteroid impact caused a relatively short-lived, yet massive algal bloom – this is an important new aspect helping us to understand what happened in the aftermath of the Chicxulub impact.”

Following the enormous impact of the asteroid, the ocean circulation changed dramatically. Dust and sulfate aerosols thrown high into the atmosphere by the impact blocked much of sunlight. As a consequence, surface waters cooled down, became denser and heavier. While these colder water masses sank into the depths, warmer, nutrient-rich water from deeper ocean layers rose to the ocean’s surface.

“At the same time, essential nutrients, in particular iron, were also delivered from above, basically dust blown into the air by the impact of the iron-rich asteroid – and led to massive, short-lived blooms of algae,” explains PIK scientist Dr. rer. nat. habil. Georg Feulner. “In our simulations, the productivity in the ocean, that is the biomass produced by the algae, drops to almost zero in the three years following the impact due to the missing light and the cold. Once the light comes back, there is a brief peak of biomass production at a maximum value about a factor of seven higher than before the impact.” Although the peak lasts only for a few years, higher productivity persists for decades to centuries, returning to pre-impact levels only after approximately 500 years.

Julia Brugger adds: “It is likely that the algal blooms produced toxic substances that led to massive changes in ocean life.”  In interaction with the various other severe effects of the impact like the sudden and strong cooling, darkness, wildfires and moderate ocean acidification, the study lends further evidence that the asteroid impact has contributed to the mass extinction of not only dinosaurs, but also of many marine species.

“This study of the Earth’s past holds a lesson for the loss of biodiversity today,” concludes Georg Feulner. “66 million years ago, the Chicxulub impact caused rapid environmental disturbances, exposing Earth’s biosphere to multiple pressures which ultimately resulted in a major mass extinction event. Although the drivers of current global warming and the modern biodiversity crisis are different, the past can teach us how a combination of simultaneous pressures can severely harm life on Earth. Luckily, we still have the chance to stop man-made climate change and biodiversity loss.” 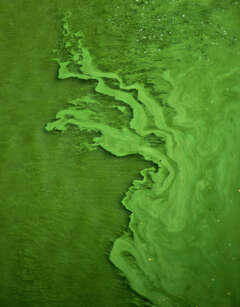