Ancestors of the domestic cat led an opportunistic lifestyle

Together with an international team, researchers of the Senckenberg Center for Human Evolution and Palaeoenvironment at the University of Tübingen studied the feeding habits of the ancestors of present-day domestic cats. They concluded that the first cats known from Europe did not rely on humans. Instead, 6,200 to 4,300 years ago, the cats fed both on wild animals as well as rodents that were closely associated with human agriculture. The study will be published today in the scientific journal “PNAS.”

The African wildcat (Felis silvestris lybica) is the ancestor of all present-day domestic cats. The sandy-colored animals originated on the African continent. “Around 6,000 years ago, the animals also became established in Europe, where they spread as domesticated cats,” explains Prof. Dr. Hervé Bocherens of the Senckenberg Center for Human Evolution and Palaeoenvironment at the University of Tübingen, and he continues, “The oldest fossils date back about 6,200 years and were discovered in Poland. We asked ourselves how these animals were domesticated after they spread into Europe.”

To answer these questions, Bocherens, together with the study’s lead author, Magdalena Krajcarz of the Nikolaus Kopernikus University in Toruń, Poland, and an international team, measured stable isotopes in the fossilized cats’ bone collagen. The different isotope ratios allow the scientists to make inferences about the animals’ diet. “We examined a total of six cat fossils from discovery sites in Poland. For comparison purposes, we also measured fossils of the oldest known domestic cats from Poland as well as 34 additional animals that occurred alongside the cats in Europe around 6,000 years ago,” explains the scientist from Tübingen. The study aims to also reconstruct the historical connections between humans and cats by studying the ecology and sociology of the immigrated African wildcats.

The study’s results show that the newly arrived ancestors of the domestic cat did not entirely rely on humans. Bocherens explains, “The bones in the cat fossils contain evidence of rodents that occurred in close association with human agriculture, along with signs of wild prey animals.” These analysis results indicate that the ancestors of modern domestic cats continued to live in the wild and only obtained part of their diet near human habitations.

“This means that the animals were not synanthropic, i.e., entirely adapted to humans and their environment, but – contrary to the dogs of that period – led an ‘opportunistic’ lifestyle. When they were unable to find food in the wild, which they had to share with the native European wildcats, they were not averse to foraging in the vicinity of human dwellings,” says Bocherens in summary, and he adds, “The native European wildcats also fed on these rodents, so there really was a direct competition for food between the two forms. However, due to the ample food supply, this apparently did not lead to the displacement of either one of these felines.”

The University of Tübingen is one of eleven universities in Germany that were recognized as excellent. Within the life sciences, it provides top-of-the-line research in the fields of neurosciences, translational immunology and cancer research, microbiology and infectious disease research, as well as molecular biology. Additional research emphasis is given to machine learning, geo- and environmental research, archeology and anthropology, language and cognition, and education and media. More than 27,600 students from all over the word are currently enrolled at the University of Tübingen, where they can choose from over 200 study courses – from Archeology to Zoology. 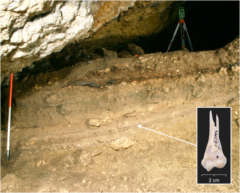 The Żarska Cave is one of the discovery sites of the cat fossils used in this study. 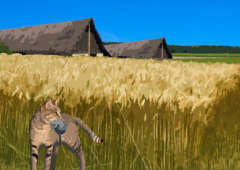 Although cats did not rely on humans, they added agricultural nuisance animals to their diet. Image: Maciej T. Krajcarz