Together with his colleague Christian Neumann of the Natural History Museum in Berlin, Senckenberg scientist Max Wisshak documented a sea urchin’s fight for survival on the ocean floor off Spitsbergen. In their study, recently published in the scientific journal “Polar Biology,” the researchers show that despite traumatic injuries – more than one third of its shell and several vital organs had been lost – the marine creature from the genus Strongylocentrotus continued to move along the seabed for at least 43 hours and even evaded an attack by a large crab. The case documents the sea urchins’ high potential for regeneration, which developed in the course of their evolution.

Echinoderms, which include sea urchins, sea stars, and sea cucumbers, among others, have excellent regenerative abilities: sea stars, for example, are able to replace entire arms, and in certain cases can even regrow several new arms from a single one. “While there are several studies regarding the self-healing powers of sea stars, the question whether sea urchins have the same abilities has hardly been addressed to date,” explains Dr. Max Wisshak of Senckenberg am Meer (Senckenberg by the Sea) in Wilhelmshaven, and he continues, “Based on a series of photographs from the ocean floor off Spitsbergen we were now able to directly observe the resilience of one of these animals in its natural environment.”

The spectacular images were taken in 2016 during an expedition to Spitsbergen with the research vessel Maria S. Merian. For one week, the researchers placed an experimental platform equipped with measuring devices and an automated camera system on the sea floor. In the process, the urchin protagonist came into focus: a sea urchin from the genus Strongylocentrotus, measuring roughly 38 millimeters across. “Despite a gaping hole in its protective shell in a place that should normally hold its sexual organs, the anus, and other vital organs, we were able to observe how the small sea dweller continued to move along the ocean floor for 43 hours and 20 minutes. It was even able to evade an attack by a large crab,” relates the geobiologist from Wilhelmshaven.

According to the study, the reason why this small sea urchin was able to survive so long despite its lethal-looking wound is the fact that sea urchins have a decentralized nervous system instead of a true brain, which continues to function even in the event of serious injuries.

It is not clear how the sea urchin came to be damaged. Among others, the animals are on the menu of fishes and large crustaceans that break open the sea urchins’ shells and feast on the soft organs. “Therefore, a natural injury is certainly possible. Unfortunately, we cannot exclude the possibility that we injured the echinoderm ourselves when lowering our research equipment,” explains Wisshak. In the latter case, the sea urchin would have already been in its injured state for four days before it came into the camera’s focus.

It also remains an open question whether the little denizen of the ocean floor survived after the filming concluded. “We are aware of fossil sea urchins with often significant cracks in their shells that subsequently healed completely. We therefore believe that sea urchins – like their relatives, the sea stars – have a high regenerative capacity, and we assume that self-healing is a part of their evolutionary history that provides them with better chances of survival as prey animals,” adds Wisshak in closing. 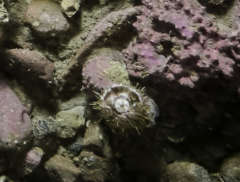 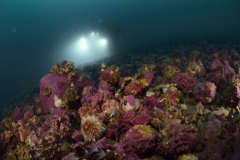 The ocean floor off Spitsbergen was examined with the submersible JAGO. Photo: Solvin Zankl