For most giant tortoises, Darwin came too late

In the Bahamas, an extinct species of tortoise that was closely related to the Galapagos giant tortoises once lived.

Together with an international team, the Senckenberg researchers Christian Kehlmaier and Uwe Fritz have sequenced ten nearly complete mitochondrial genomes of the extinct giant tortoise Chelonoidis alburyorum from the Bahamas. The author team, including Nancy Albury from the National Museum of The Bahamas and Richard Franz and David Steadman from the Florida Museum of Natural History, compared their data with other tortoise species. The researchers show in their article, published today in the journal “Scientific Reports,” that the tortoises from the Bahamas were closely related to the giant tortoises from Galapagos. Moreover, they found that there was only one species from the Bahamas Islands and another from the Galapagos Islands. Previously, it was believed that 15 distinct species occur on the Galapagos Islands.

Giant tortoises, weighing up to 400 kilograms with a shell length of more than one meter, live today only on the Galapagos Islands in the eastern Pacific and on the Aldabra Atoll in the Indian Ocean. Giant tortoises are one of the iconic animals that inspired Charles Darwin to his renowned evolutionary theory. “In former times,” explains Professor Fritz from the Senckenberg Natural History Collections Dresden, “giant tortoises had a much wider distribution. Two hundred years ago giant tortoises lived on the Mascarene Islands, east of Madagascar, and a few thousand years ago they were present on many other islands, for instance on Fiji, the Bahamas, Cuba, Madagascar, Sicily, and the Canary Islands.”

Today only bones and shells of these impressive animals are found there. The species became extinct nearly everywhere shortly after the arrival of humans. Fritz and his coauthors studied several 700- to 2,700-year-old bone samples from seven Bahamian islands. “We succeeded in sequencing ten near-complete mitochondrial genomes of tortoises from six of these islands. Our analyses provide evidence that the Bahamas were colonized by giant tortoises approximately 1.5 million years ago. On the individual Bahamian islands, morphologically very distinct tortoises occurred. However, genetically all of these tortoises represented only one species that has been exterminated before the arrival of the first Europeans,” explains the biologist from Dresden. 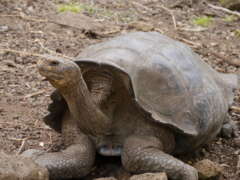 Morphologically, Galapagos tortoises are variable but genetically, they represent only one species. The photo shows a giant tortoise with a saddleback shell. Photo: Senckenberg 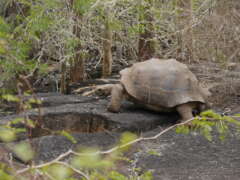 The second shell type on the Galapagos Islands are giant tortoises with domed shells. Photo: Senckenberg