Early evolution of snakes in the Messel Pit examined

Together with his Argentinian colleague Agustín Scanferla, Senckenberg scientist Krister Smith studied the early evolution of snakes in the Messel Pit. In its study, recently published in the scientific journal “Diversity,” the team was able to show that around 48 million years ago, the ecosystem of the modern-day UNESCO World Heritage Site was home to a wide diversity of snakes. According to their results, a species of snake previously known as Palaeopython fischeri – named after former German foreign minister Joschka Fischer – actually belongs to the genus Eoconstrictor and was able to generate an infrared image of its surroundings.

Complete skeletons of snakes are only rarely found in fossil sites around the world. In this regard, the UNESCO World Heritage Site “Messel Pit” near Darmstadt is an exception. “To date, four extremely well-preserved snake species could be described from the Messel Pit,” explains Dr. Krister Smith of the Senckenberg Research Institute and Natural History Museum, and he continues, “With a length of approximately 50 centimeters, two of these species were relatively small; the species previously known as Palaeopython fischeri, on the other hand, could reach a length of more than two meters. While it was primarily terrestrial, it was probably also capable of climbing into trees.”

The snake – named after former German foreign minister Joschka Fischer, who, in conjunction with the German Green Party (Bündnis 90/Die Grünen), helped to prevent the Messel Pit being turned into a landfill in 1991 – was now studied in greater detail by Smith and his colleague Agustín Scanferla of the Instituto de Bio y Geosciencia del NOA, using a combination of analytical methods. “First, we discovered that – contrary to previous assumptions – the species does not belong to the genus Palaeopython. Instead, based on various characteristics, we were able to assign it to the genus Eoconstrictor, which is related to the South American boas,” explains the paleoherpetologist from Frankfurt.

A detailed analysis of the neurological pathways of Eoconstrictor fischeri revealed another surprise. The neurological pathways of the Messel snake are comparable to those of the recent large boas and pythons – snakes that possess so-called “pit organs.” These organs are located between the scales of the upper and lower jaws and allow the snakes to generate a three-dimensional heat image of their surroundings by combining visible light and infrared radiation. This enables the reptiles to more easily detect prey animals, enemies, or hiding places.

“However, in Eoconstrictor fischeri these organs were only present on the upper jaw. Moreover, to our surprise there is no evidence that this snake preferred warm-blooded prey. Until now, we could only confirm cold-blooded prey animals such as crocodiles and lizards in its stomach and intestinal contents,” adds Smith.

The team of scientists therefore assumes that the earliest pit organs served to generally refine the snakes’ sensory perception and – other than in modern constrictor snakes – were not primarily used for hunting or defense purposes. 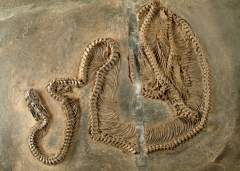