Live birth of a land snail preserved in amber

Together with an international team, Adrienne Jochum of the Senckenberg Research Institute and Natural History Museum Frankfurt and the Natural History Museum Bern has made an extraordinary discovery: The researchers found a fossilized female land snail enclosed in a 99-million-year-old piece of amber together with her five young. Not only does the snail represent a previously unknown species, but this is also the oldest record of a live birth in this class of animals. The study was published in the scientific journal “Gondwana Research.”

Land snails are usually preserved as fossilized snail shells or imprints, while  preservation of their soft bodies is a rarity. “Our new amber find is truly remarkable for this reason as well,” explains Dr. Adrienne Jochum of the Senckenberg Research Institute and Natural History Museum Frankfurt and the Natural History Museum of the Burgergemeinde Bern, and she continues, “In a piece of Cretaceous amber from Myanmar, we discovered the body and shell of an exceptionally well-preserved female land snail shortly after the birth of her offspring, which is also preserved in the amber.”

Together with colleagues from China and Germany, Jochum examined the amber using high-resolution photography and micro-computer tomography images and was able to reveal the snail shell, which is about 11 millimeters high, and the “marshmallow-like” body of the mother as well as the five newly-born young. “The snails were apparently encased in the tree resin immediately after birth and preserved in that position over millions of years. The mother snail must have noticed her impending fate and is stretching her tentacles up in a ‘red alert’ posture,” adds Jochum.

Although live births are known in land snails, they are considered the exception. The researchers assume that the species, newly described as Cretatortulosa gignens, gave birth to its young alive in order to protect its offspring from predators as long as possible in the tropical forests of the Cretaceous. Jochum explains, “Just like their modern relatives from the genus Cyclophoroidea, our new discovery probably spent its life inconspicuously on dead and rotting leaves. We assume that the young of this species – compared to egg-laying snails – were smaller and lower in number to increase their chance of survival.”

According to the study, the fossil from an amber mine in northern Myanmar offers unprecedented insights into the ecology and behavior of snails that lived 99 million years ago. “Based on the discovery, we can not only make statements about the morphology and paleoecology of the animals, but we now also know that viviparous snails existed in the Cretaceous period,” adds a delighted Jochum. 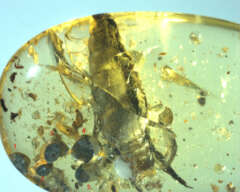 A 99-million-year-old live birth in amber. The female snail and her five young. Photo: Tingting Yu 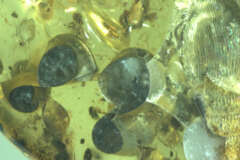