In a study published in the scientific journal “Vertebrate Zoology,” Senckenberg researchers described the new frog species Dendropsophus rozenmani. The habitat of these tiny frogs from the tree frog family is limited exclusively to eastern Bolivia – a region currently affected by devastating forest fires. The study’s lead author, Martin Jansen, warns against the loss of the – still widely unknown – biodiversity in Bolivia and urges for radical changes in agricultural, trade, and environmental policies.

Countless forest fires are currently raging across South America. In Bolivia alone, more than 2.1 million hectares are believed to have been impacted until now – particularly in the Chiquitania region in eastern Bolivia. “According to recent estimates, the fires in this region affect at least 1,600 species of animals and 4,000 plant species – including about 150 mammals such as jaguar, tapir, od the giant anteater, as well as 60 to 90 species of frogs,” explains Dr. Martin Jansen of the Senckenberg Research Institute and Natural History Museum in Frankfurt, and he adds, “We are lacking exact numbers, since the region has been poorly studied to date and many animal and plant species have not yet been described scientifically.”

The new tree frog species Dendropsophus rozenmani, only recently described by Jansen and an international team based on morphological, bioacoustic, and genetic characteristics, is among the species directly threatened by the fires. The habitat of this brown-striped frog with a length of only about 20 millimeters is restricted to eastern Bolivia. “These animals have very limited mobility,” says the herpetologist from Frankfurt. “In the areas that were burnt, not one frog will have survived.”

The tiny, acutely threatened amphibian was named after Jaimé Rozenman, owner of a private nature reserve where the newly discovered frog was found. By naming the frog, the researchers intended to give a nod to active nature conservation. “Every reserve, no matter how small, can make a difference, and the engagement of landowners such as Rozenman should be honored,” explains Jansen, and he concludes, “In order to preserve the living space of numerous animals and plants, we need fundamental changes in agricultural, trade, and environmental policies. Not only in Bolivia, but in our home country as well – in part, the fires in South America are the direct result of trying to satisfy the demands for soy and meat, primarily from Europe and China.” 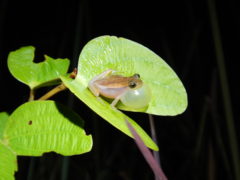 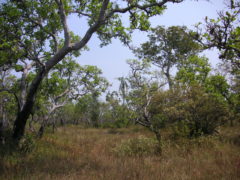 The habitat of the tiny frogs – prior to the devastating forest fires.