Herbivores in the Holocene – eenie, meenie, miney, mo, and you must go!

An international team involving Hervé Bocherens of the Senckenberg Centre for Human Evolution and Palaeoenvironment at the University of Tübingen has studied the effects of environmental changes in the Holocene on the megaherbivores, i.e., European bison, moose, and aurochs. The researchers concluded that the aurochs was unable to adapt to the altered conditions – the increasing spread of forests and humans – and therefore went extinct. The study was recently published in the scientific journal “Global Change Biology.”

Numerous large herbivores such as mammoths, giant elks, and woolly rhinoceroses did not survive the last Ice Age. “In Europe, only three of these so-called megaherbivores – European bison, moose, and aurochs – were still found in the subsequent geological epoch, the Holocene,” explains Prof. Dr. Hervé Bocherens of the Senckenberg Centre for Human Evolution and Palaeoenvironment at the University of Tübingen, and he continues, “However, only the European bison and the moose survived until today.”

The reasons for the extinction of the aurochs and the continued survival of European bison and moose have now been examined in an extensive study conducted by Bocherens in conjunction with his colleague Rafał Kowalczyk of the Polish Academy of Sciences and an international team.
“Since the onset of the Holocene about 11,700 years ago, these animals were exposed to massive environmental changes – the transition of the vegetation from open steppes to forests, on the one hand, and the increasing spread of humans, on the other,” says Bocherens.
The researchers determined the carbon-nitrogen isotope ratio in the bone collagen of 295 fossils from 14 European countries. The results show that all three species of herbivores were forced to alter their feeding habits. According to the study, the European bison was most flexible in this regard, followed by the moose. However, the aurochs with its specialized diet had a hard time coping with the changes.

Bocherens and his colleagues presume that the animals were unable to find sufficient food in the forests, and yet could not leave the woods due to the increasing hunting pressure brought about by the spread of humans. “Ultimately, this led to the extinction of the aurochs in the early 17th century,” concludes the scientist from Tübingen.

European bison in the Białowieża Forest. 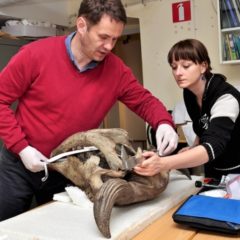 Measuring a European bison skull prior to sample extraction. 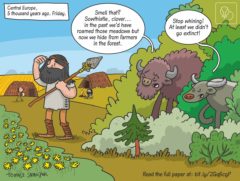