How Did We End Up With The Proper Sniffer?

Together with Japanese scientists, Ingmar Werneburg of the Senckenberg Centre for Human Evolution and Palaeoenvironment at the University of Tübingen provides evidence in a new study that the characteristic facial structure of mammals with their prominent noses is a comparatively new phenomenon in evolutionary terms. The highly developed sense of smell in most mammals likely also favored brain development. The study was published in the scientific journal “Proceedings of the National Academy of Sciences.”

Unlike other terrestrial vertebrates, most mammals have protruding, flexible noses that significantly enhance the senses of smell and touch. “Nevertheless, until now, science regarded the evolution of the reptilian and mammalian faces as relatively comparable,” explains PD Dr. Ingmar Werneburg, the study’s co-author and a researcher at the Centre for Human Evolution and Palaeoenvironment at the University of Tübingen, and he continues, “Now we are able to show that the mammalian snout represents a drastic deviation from the common groundpattern – and a new development in evolutionary terms.”

Werneburg and a team of scientists led by Dr. Hiroki Higashiyama from the University of Tokyo investigated the development of the cell clusters that later form facial structures, the so-called “facial prominences.” The scientists marked these cells, traced their movement and growth, and finally compared the nerve supply to the snout areas. “Twenty years ago, this level of detail would have been technologically unthinkable,” says Ingmar Werneburg. The researchers compared the development in different species, including chickens, echidnas, geckos, and mice, and also examined fossil specimens from the 200-year-old Paleontological Collection in Tübingen. This collection houses the most comprehensive assemblage of early mammalian ancestors in the world.

The result is clear: “The bone at the tip of the reptilian jaw, known as the premaxillary bone, was reduced in size to form the nasal portion in mammals. The bone behind it became enlarged to form the tip of the mammalian jaw,” explains the scientist from Tübingen, and he adds, “This is what makes ‘sniffing’ anatomically possible in the first place – nostrils can be moved, odors can be inhaled. This makes a wealth of new information about the environment available.” The highly developed olfactory sense in most mammals likely also aided in brain development in this way. Research in this area could lead to a better understanding and early detection of abnormalities in human facial development, such as cleft palates, the researchers state in their study.

The facial structure of mammals already intrigued the poet and naturalist Johann Wolfgang von Goethe. After his anatomical studies under Justus Christian Loder at the University of Jena, he discovered the premaxillary bone in a human fetus on March 27, 1784. Goethe took the existence of this bone as an indication that “a difference between man and animal is not to be found in any single feature,” which was consistent with his worldview of a holistically organized nature. “Even if the study of facial bones already has a long history, our results show that the story is far from being told, and that comparative anatomy is inexhaustible,” Werneburg adds in conclusion.

Frontal view of a mammoth skull as an example of an extinct mammal. Photo: Valentin Marquardt, Paleontological Collection Tübingen

Stained bovine skull from the Tübingen paleontology teaching collection: The black-stained slender bone on the far left (arrow) is the premaxillary bone. Behind it, in orange, is the maxillary bone. Photo: Ingmar Werneburg

The six palaeontological collections of the University of Tübingen were established as a research and teaching collection in the early 18th century. 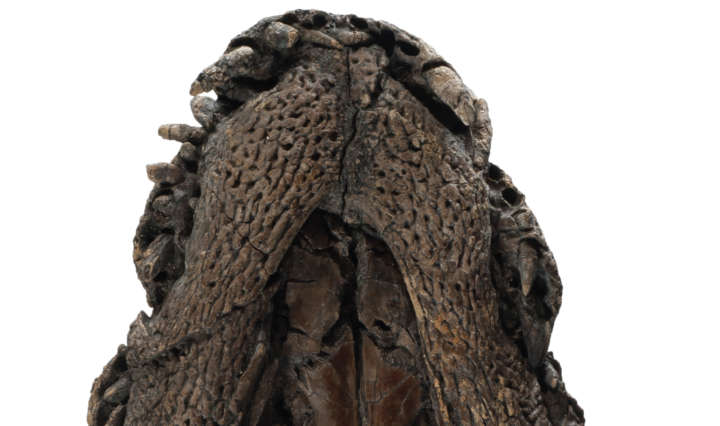