The conservation status of this bizarre armored reptile must be reassessed

Together with an international team, Senckenberg scientist Uwe Fritz described a new species of mata mata turtle based on genetic analyses. Until now, it had been assumed that the genus Chelus only contained a single species. The new description also necessitates a reassessment of the conservation status of these species, which are frequently sold in the illegal animal trade. The study was recently published in the scientific journal “Molecular Phylogenetics and Evolution.”

There is a good reason for the bizarre appearance of the mata mata turtle: hidden in the mud under water, the up to 53-centimeter-long animals look like algae-covered rocks. But when a prey animal approaches, the turtle sucks it in by suddenly opening its large mouth and swallows it whole. “Although these turtles are widely known due to their bizarre looks and their unusual feeding behavior, surprisingly little is known about their variability and genetics,” explains Professor Dr. Uwe Fritz of the Senckenberg Natural History Collections in Dresden, and he continues, “Until now, we assumed that there is only one species of this armored reptile that ranges widely across South America.”

But such supposedly widespread species, which are not considered endangered, can be full of surprises – based on genetic analyses, they are often split into two or more independent species. “Several studies have pointed out individual mata mata turtles look differently in the Orinoco River compared to the Amazon Basin. Based on this observation, we decided to take a closer look at these animals’ genetic makeup,” adds the scientist from Dresden.

Using 75 DNA samples, the researchers were able to show that, contrary to previous assumptions, there are two genetically and morphologically well-differentiated species of mata mata turtles. The newly described species Chelus orinocensis inhabits the Orinoco and Río Negro basins, while the species known as Chelus fimbriata is restricted exclusively to the Amazon basin.

According to the study, the two species split during the late Miocene, around 13 million years ago. During this period, the former Amazon-Orinoco Basin began separating into the two river basins known today. Numerous aquatic animal species were thus spatially separated and began to diverge genetically.

The description of the new species also necessitates a reassessment of the mata mata’s conservation status. “To date, this species was not considered endangered, based on its widespread distribution. However, our results show that, due to the split into two species, the population size of each species is smaller than previously assumed. In addition, every year, thousands of these bizarre-looking animals end up in the illegal animal trade and are confiscated by the authorities. We must protect these fascinating animals before it is too late,” adds the study’s lead author, Professor Mario Vargas-Ramírez, a former researcher of Senckenberg who now works at the National University of Colombia in Bogotá. 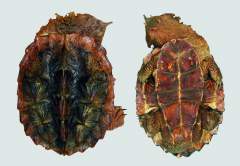 The newly described species Chelus orinocensis is found in the Orinoco and Río Negro basins. 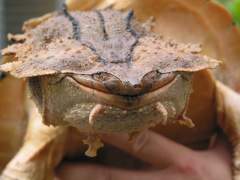 Based on genetic analyses, a second species of mata mata turtle was discovered. Photo: Rune Midtgaard

A rescue island for the northern river terrpain

Shell Puzzle: An Additional Piece Added to the Evolution of Turtles

Link between skull and neck evolution in turtles clarified