Medicine From The Ocean

Together with an international team, Senckenberg scientist Julia Sigwart has developed proposals on how to utilize the potential of natural substances from the oceans more efficiently in the production of medical agents. In a note that was recently published in the scientific journal “Natural Product Reports,” the researchers underlined the importance of marine organisms in the medical field. They are calling for a streamlining of scientific processes to allow faster identification of potential medicinal substances.

The approved active substance Vidarabine® was originally extracted from the marine sponge Tectitethya crypta. The fish toxin  curianol is used in heart surgery. And the bioluminescence of the jellyfish species Aequorea victoria is used by doctors around the world as a so-called reporter gene.

“Since the earliest times, natural substances have been an important source of medicinal agents for the treatment of human diseases – roughly half of the drugs we use today, including antibiotics and cancer-fighting agents, have their origin in nature,” explains Dr. Julia Sigwart of the Senckenberg Research Institute and Natural History Museum in Frankfurt, and she continues, “Most of these medicinal agents are based on substances found in plants and in microorganisms that are primarily extracted from soil samples. The oceans, which cover more than two-thirds of the earth’s surface, have only played a subordinate role in this context to date.”

According to a note recently published in the scientific journal “Natural Product Reports” by a team around the marine biologist from Frankfurt, the oceans’ potential has not yet been fully exploited – despite the proven fact that marine substances are four times as efficient in medicinal comparison to natural substances from dry land. “Life in the oceans has been around for approximately 3.7 billion years – three times as long as on dry land. The diversity of marine organisms is therefore disproportionally higher – around 90 percent of marine organisms are considered as yet undescribed,” adds Sigwart.

Sigwart and her colleagues would like to remedy this imbalance, and the researchers developed five approaches toward solving this problem: First, they promote an investment in basic research – even if a connection to the industry is not immediately apparent. A second step is aimed at placing the cooperation between science and industry on a more equal footing. Young scientists should be supported in studying lesser-known organisms and habitats – in this area, the team expects the greatest potential for exciting new medicinal discoveries. The scientists’ fourth point is the data exchange with global networks. “The fifth component involves the comprehensive protection of the biological and genetic diversity in the oceans – the loss of marine biodiversity will directly result in the loss of potential remedies that could have a significant effect on the well-being of all humanity,” adds Sigwart in conclusion. 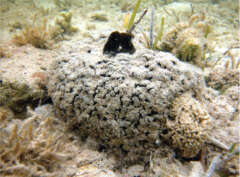