Fossils suggest that the constrictors’ origin lies in Europe

Together with his colleague Hussam Zaher of the University in São Paulo, Senckenberg scientist Krister Smith described the world’s oldest known fossils of a python. The almost completely preserved snakes with a length around one meter were discovered in the UNESCO World Heritage Site “Messel Pit” and are about 47 million years old. The new python species, Messelopython freyi, was named in honor of paleontologist Eberhard “Dino” Frey of the State Museum of Natural History in Karlsruhe. The study was published today in the scientific journal “Biology Letters.”

Reaching a length of more than six meters, pythons are among the world’s largest snakes. Today, various species of these constrictors are found primarily in Africa, Southern and Southeast Asia, and Australia. “The geographic origin of pythons is still not clear. The discovery of a new python species in the Messel Pit is therefore a major leap forward in understanding these snakes’ evolutionary history,” explains Dr. Krister Smith of the Senckenberg Research Institute and Natural History Museum in Frankfurt.

The new python species Messelopython freyi described by Smith and his Brazilian colleague, Dr. Hussam Zaher, is the oldest known fossil record of a python anywhere in the world. “According to our findings, these snakes already occurred in Europe at the time of the Eocene, over 47 million years ago. Our analyses trace their evolutionary history to Europe!” adds Zaher.
.
However, the large constrictor snakes subsequently disappeared from the European continent for quite some time. Fossils of this snake family did not appear again until the Miocene – between 23 and 5 million years ago. “As the global climate began to cool again after the Miocene, the pythons once again disappeared from Europe,” says Smith.

Contrary to the primeval python from Messel, modern pythons live in complete spatial separation from their anatomically very similar relatives, the boas. “However, in Messel, both Messelopython freyi as well as primitive boas such as Eoconstrictor fischeri lived together in the same ecosystem – we therefore have to revisit the thesis that these two groups of snakes competed with each other, making them unable to share the same habitats,” explains Smith.

The snake’s scientific name is a combination of the locality where it was found and the snake’s family. The specific epithet of the newly discovered fossil is owed to Prof. Dr. Eberhard Frey of the State Museum of Natural History Karlsruhe. “Eberhard Frey bears the nickname ‘Dino’ for a good reason – he is world-renowned for his exacting studies of fossil reptiles. By naming a new species after him, we wanted to honor his accomplishments in the field of paleontology,” adds Smith to explain the fossil’s naming. 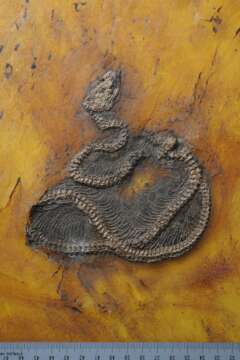 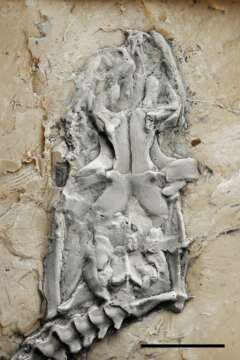 The head and body of the Messel python are almost completely preserved.