Mikroplastics 8250 Meters Under the Sea

Together with colleagues from the Alfred Wegener Institute and the Johann Heinrich von Thünen Institute, Senckenberg scientists Serena Abel and Angelika Brandt examined sediment samples from the Kuril-Kamchatka Trench for the presence of microplastics. In their study, which was recently published in the scientific journal “Environmental Pollution,” the researchers show that one kilogram of sediment contains between 14 and 209 microplastic particles. Overall, the team was able to document 15 different types of plastics in the samples.

Humans produce more than 400 million tons of plastic each year – and the negative side effects of this are apparent in the form of plastic islands in the oceans and plastic waste in rivers, forests, and along roadsides. “Plastic remains can even be found in the deepest oceans,” explains Serena Abel of the Senckenberg Research Institute and Natural History Museum in Frankfurt, and she continues, “Therefore, we were interested in discovering the extent of microplastics pollution in the sediments of the Kuril-Kamchatka Trench – a deep-sea trench in the northwestern part of the Pacific Ocean.”

To this end, the research associate teamed up with Senckenberg’s department head for Marine Zoology, Prof. Dr. Angelika Brandt, and colleagues from the Alfred Wegener Institute and the Johann Heinrich von Thünen Institute to analyze eight sediment samples from a deep-sea expedition in the year 2016.
“The proportion of microplastics in our samples varied between 14 and 209 particles per 1000 grams of dry sediment. The most frequent occurrence of microplastics was recorded at one of the deepest sampling stations in the Kuril-Kamchatka Trench,” explains Abel. The eight samples came from four stations at depths of 5143, 6065, 7138, and 8255 meters. Abel continues, “Apparently, a significantly higher amount of microplastics accumulates in the deeper regions. This is likely due to the fact that the particles can easily be transported to these areas but subsequently are “caught” there. These trenches thus act as veritable ‘plastic traps.’”

Overall, the research team identified 15 different types of plastics in the samples. All sediments contained polypropylene, a standard plastic commonly used in packaging materials. In addition, 75 percent of the samples contained polyethylene, and about 63 percent contained polyester. “All microplastic particles showed sizes below 375 micrometers, and the vast majority were smaller than 125 micrometers, i.e., about one-eighth of a millimeter,” adds the marine researcher from Frankfurt.
The scientists were able to discover the minute microplastic particles by means of the so-called Micro-FTIR method, a special variant of a spectrometer.

“We do not know exactly how much plastic is present in the deep sea; however, our results show that the trenches on the ocean floor, in particular, can serve as plastic sinks. Global estimates of the incidence of microplastics in our oceans indicate that there must be a portion that exists outside the water column and is missing from these estimates. The accumulation of microplastics in these areas could represent this ‘missing’ share,” says Brandt in conclusion, and she adds, “Microplastics in the deep sea also mean that the basis of the food chain is affected, since many invertebrates feed on sediments, including the microplastic particles. Therefore, future generations unfortunately will have to deal with the consequences of today’s environmental pollution for a long time to come.” 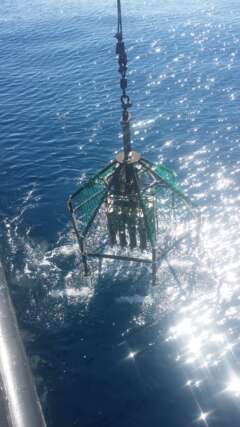 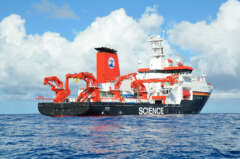 The deep-sea expedition took place in 2016 aboard the research vessel SONNE. Photo: Senckenberg