The raccoon dog from Asia and the North American raccoon will likely continue to spread across Europe in the near future, scientists from the Senckenberg Biodiversity and Climate Research Centre and the Goethe University currently report in ‘Mammal Review.’ The researchers investigated in which areas in Europe the species might experience climatic conditions similar to their native ranges and therefore find a suitable habitat. The raccoon dog is considered a potential reservoir host of coronaviruses (including SARS-CoV-2); moreover, along with the raccoon, it is listed as an invasive species in the European Union.

Their home ranges lie on opposite ends of the world, yet they share a common trait: The North American raccoon (Procyon lotor) and the raccoon dog (Nyctereutes procyonoides), originally a native of Asia, were both brought to Europe during the 20th century in the wake of fur farming and as prey animals for hunters. Since then, both species have spread over wide areas. Throughout Europe, the raccoon is now established in 20 countries, while the raccoon dog inhabits as many as 33 countries.

It is expected that these species, which bear a superficial resemblance to each other, will colonize even larger areas in Europe in the future. This is based on the results of a study by Dr. Judith Kochmann, a Postdoc at the Senckenberg Biodiversity and Climate Research Centre and the Goethe University in Frankfurt. “In Europe, the animals do not yet occupy all regions with suitable climatic conditions, i.e., regions that are a potential habitat for them. Therefore, it is likely that the ranges of raccoon and raccoon dog in Europe will expand significantly in the future.”

In their study, Kochmann and her team used eight variables to analyze the temperature and precipitation conditions under which the two species have been documented to thrive in their home regions – i.e., North America and Asia, respectively – and they derived the animals’ climatic niches from this information.  They then investigated in which European regions the same conditions can be encountered, and whether raccoons and raccoon dogs had already been sighted in these potential habitats. Based on this comparison, the researchers derive the potential ranges of the two species.

“Raccoons and raccoon dogs are flexible in terms of habitat and diet. In addition, they have few, if any, natural enemies in Europe. We therefore assume that their natural spread is mainly limited by climate, and in this regard, there is still room for expansion,” explains Kochmann. The habitats with a suitable climate for raccoons and raccoon dogs widely overlap in Europe. However, while the raccoon dog may spread more rapidly toward Scandinavia and Eastern Europe, it is expected that raccoons will primarily colonize southern regions. This difference is likely due to the fact that raccoon dogs tolerate lower temperatures in the winter, according to the study’s authors.

One of the risks that raccoons and raccoon dogs pose in their new ranges is their role as a host for infectious agents, such as parasites and viruses, which in part can also be transmitted to humans (so-called zoonoses). “Raccoons transmit the raccoon roundworm and are considered reservoir hosts for the West Nile virus. Raccoon dogs host similar pathogens, including lyssaviruses that cause rabies, canine distemper viruses, and the fox tapeworm. Moreover, raccoon dogs are currently suspected to be reservoir hosts for coronaviruses (including SARS-CoV-2),” explains parasitologist Prof. Dr. Sven Klimpel of the Goethe University in Frankfurt and the Senckenberg Biodiversity and Climate Research Centre. He adds, “We currently investigate which pathogens are carried by these species in the context of our joint ZOWIAC project (“Zoonotic and wildlife-ecological effects of invasive carnivores”).

The modeling of the potential ranges of raccoon dog and raccoon presented in the study is intended to promote the monitoring of the spread of these species under epidemiological aspects. In a next step, the scientists therefore plan to expand their approach by incorporating land use data, allowing the development of improved, small-scale models. These will serve as the basis for future management measures aimed at controlling the populations of raccoons and raccoon dogs. 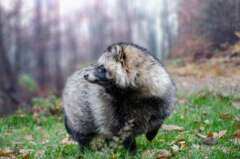 Raccoon dogs, which are considered to be reservoir hosts for coronaviruses including SARS-CoV-2, have the potential to spread more widely in Europe in the future.Copyright: Dorian Dörge