Tropical mosquito species such the yellow fever mosquito or the Asian tiger mosquito are potential vectors of serious tropical diseases and increasingly make themselves at home in North America and Europe. According to scientists from Senckenberg and the ETH Zurich, there soon may be a natural repellant against these mosquitoes. In the scientific journal “Applied and Environmental Microbiology” they report on the edible mushroom Agrocybe aegerita that is cultivated worldwide. The scientists were able to analyze a gene sequence in the mushroom’s genome that is used by the fungus to produce Ageritin – a new type of fungal toxin that is highly efficient against yellow fever mosquitoes.

Mushrooms have many enemies that they repel with toxins. This is also true for the mushroom Agrocybe aegerita, which is cultivated in Southern Europe, Asia, and the USA amongst others and is prized as an excellent edible. But there is more to this mushroom: In 2017, it was discovered that the mushroom produces the toxin Ageritin. Scientists of the German Senckenberg Biodiversity and Climate Research Centre and their colleagues from Swiss ETH Zurich in collaboration with other German and Swiss research institutions have now analyzed this fungal toxin’s mode of action and its genetic basis.

According to their study, Ageritin is a ribotoxin, i.e., it attacks ribosomes – the protein factories in the cells. There, the toxin stalls protein synthesis, which ultimately leads to cell death. Dr. Florian Hennicke, Senckenberg Biodiversity and Climate Research Centre, comments, “Ribotoxins are also produced by sac fungi (ascomycetes). However, the gene sequence that enables the production of Ageritin in Agrocybe aegerita differs significantly from the ribotoxin variants known from sac fungi. It therefore represents a new type of such a fungal toxin – the first ribotoxin from an edible agaric mushroom.”

The team of German and Swiss researchers also performed toxicity tests in the laboratory. They revealed that Ageritin is highly toxic to the larvae of the yellow fever mosquito; the level of toxicity depends on the activity of the ribonuclease. The toxin’s effectiveness against tiger mosquitoes and Japanese bush mosquitoes – two species currently on the rise in Central and Northern Europe – will be subject to tests in the near future. The cocktail of active substances in ageritin appears to be specifically tailored toward insects. Nematodes, another significant pest on mushrooms besides insects, can handle the toxin quite well, as shown by the team in laboratory tests.

Due to the species-specific effect it could be feasible to utilize the fungal toxin for developing a biological mosquitocidal agent. “Global trade and climate change make it possible for tropical and subtropical mosquito species to spread farther and farther into northern latitudes. At the same time, these mosquitoes are vectors for arboviruses causing severe tropical diseases zika, yellow fever and dengue. Therefore, the development of a biological insecticide on the basis of Ageritin offers groundbreaking possibilities for the future,” explains Hennicke.
The toxin is produced within the fruiting body of Agrocybe aegerita as the analysis of the Ageritin-producing genes revealed. It is therefore likely that Ageritin is part of the mushroom’s survival strategy. Producing the toxin protects the mushroom’s reproductive organs from animals that feed on them.

The most burning question currently asked by Hennicke and his collaborators at the ETH Zurich is how the mushroom Agrocybe aegerita protects itself from being poisoned by its own toxin, ageritin. “Obviously, much remains to be studied. In particular with respect to bio-insecticides, our results to date clearly show the importance of further studying the substances produced by fungi in greater detail,” adds Hennicke in conclusion.

Tayyrov, A. et al. (2019):  Heterologous Production and Functional Characterization of Ageritin, a Novel Type of Ribotoxin Highly Expressed during Fruiting of the Edible Mushroom Agrocybe aegerita 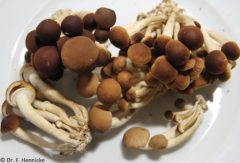 The commercially grown, edible mushroom Acrocybe aegerita has been shown to produce a toxine that kills tropical mosquitos.