Hippos and whales are close relatives, but their shared “aquatic” skin traits did not come from a common ancestor

New insights in the evolution of mammals when re-entering water: The smooth, nearly hairless skin of whales and hippos look similar, but evolved independently. This is revealed by genomic and anatomical analyses partly conducted by Michael Hiller at LOEWE Centre for Translational Biodiversity Genomics. The skin of these mammals fine-tuned for life in the water was long assumed to have come from a shared amphibious ancestor. The study published in “Current Biology” contradicts this assumption. It rather suggests that the last common ancestor was land-dwelling. Hence “aquatic” skin with specific adaptions developed more than once in mammal’s phylogeny.

“How mammals left terra firma and became fully aquatic is one of the most fascinating evolutionary stories – perhaps rivaled only by the evolution of flight,” says Dr. John Gatesy, senior research scientist in the American Museum of Natural History’s Division of Vertebrate Zoology in New York and author of a study published in “Current Biology”. “Our latest findings contradict the current dogma that relatives of the amphibious hippo might have been part of the transition as mammals re-entered life in the water.”

The study shows that the similarly smooth, nearly hairless skin of whales and hippopotamuses evolved independently. The work suggests that their last common ancestor was likely a land-dwelling mammal, uprooting current thinking that the skin fine-tuned for life in the water came from a shared amphibious ancestor. The study was led by researchers at the American Museum of Natural, the Universities of California in Irvine and Riverside, the LOEWE Centre for Translational Biodiversity Genomics at Senckenberg in Frankfurt and the Max Planck Institute of Molecular Cell Biology and Genetics in Dresden.

Despite their contrasting appearances, fully aquatic cetaceans – the group that includes whales, dolphins, and porpoises – and semi-aquatic hippopotamuses share a number of characteristics that are odd for most mammals: They give birth and nurse underwater, and lack scrotal testes as well as most of their hair. In fact, they are each other’s closest living relatives and share a common ancestor that lived about 55 million years ago. But how and when it became fully aquatic remained a subject of intense debate. “The simplest hypothesis is that the ancestor of whales and hippos was already amphibious”, says the study’s lead author Prof. Dr. Mark Springer, biology professor at the University of California, Riverside. “But evolution isn’t always the shortest distance between two points.”

For the present study researchers compared the anatomy of hippo and cetacean skin based on histology as animals’ skin shows profound evolutionary changes in response to aquatic life. They further used genomic screens to find and compare “skin genes” that are responsible for adaptions in both hippos and cetaceans. This was aided by examining – for the first time – the genome of the pygmy hippo (Choeropsis liberiensis), one of only two living hippo species.

“When you look at the molecular signatures, there is a striking and clear answer,” says author and evolutionary genomicist Prof. Dr. Michael Hiller from the LOEWE Centre for Translational Biodiversity Genomics and the Max Planck Institute of Molecular Cell Biology and Genetics in Dresden. “Our results strongly support the idea that ‘aquatic’ skin traits found in both hippos and cetaceans evolved independently. And not only that. We can see that the gene losses in the hippo lineage happened much later than in the cetacean lineage.” Hence whale ancestors started evolving “aquatic” skin traits earlier. But how?

“When a group of animals becomes aquatic, skin becomes much more streamlined and uniform throughout,” says Prof. Dr. Maksim Plikus, author and skin biologist from the University of California, Irvine. “Hairs, nails, or sweat glands are no longer needed, and in fact, can become a hinderance to life under water, so those go away.” Both, hippos and whales, show such adaptions, but there are also differences. Unlike whales, hippos have a specialized kind of sweat glands that produce “blood sweat”, an orange-colored substance that is speculated to have natural anti-microbial and sunscreen properties. And while cetaceans only have a few whiskers, hippos are fully whiskerd but also have sparse body hairs, most prominent on their ears and the tip of their tail. In addition, cetacean skin is much thicker than hippo skin, and hippos are alone in having hooves.

If such characteristics are lost or change in phylogeny, researchers can trace it in their DNA. Underlying genes are for example switched off by mutations or are no longer passed on to descendants at all. The genomes of hippos and the group of whales tell different evolutionary stories in this respect.

“These differences are fully consistent with the record of evolutionary history that is written in their genomes, which shows the independent knockout of skin genes on the cetacean lineage and on the hippo evolutionary line,” Springer says. “None of the inactivating mutations that would have suggested a common aquatic ancestry are shared between these two groups.” 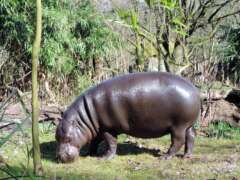 Researchers examining for the first time the genome of the pygmy hippo (Choeropsis liberiensis), one of only two living hippo species.
Photo: Zoo Duisburg gGmbH 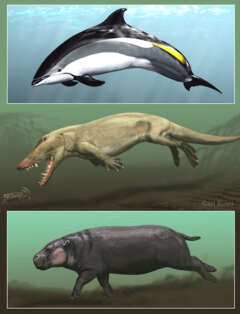 It looks different at first glance, but dolphins (top), whales and hippos (bottom) are each other’s closest living relatives. Genomic studies now shed light on the common ancestor of the water-living mammals (middle: illustration of an ancestor of whales and dolphins).