The Gollum Snakehead gets its own fish family

The subterranean bony fish is classified in its own new family

As part of an international team, Senckenberg scientist Ralf Britz described a new bony fish family. These fishes, which live in subterranean, water-bearing rock formations, were only recently discovered in Southern India. Using computer-tomographic, molecular-genetic, and morphological methods, they were now assigned to a new family. In addition, the researchers’ analysis revealed that the new family Aenigmachannidae split from its sister group Channidae a long time ago and represents a so-called “living fossil.” The study was published today in the journal “Scientific Reports.”

The coastal strip of the Western Ghats, a mountain range in western India, gave rise to an endemic fauna of groundwater-dwelling organisms. “Ten species of fishes are known from this area to date. The first species was already described from this habitat in 1950, but the latest discovery – the bony fish Aenigmachanna gollum, named after Gollum, the cave-dwelling character from Tolkien’s ‘Lord of the Rings’ – was made only one year ago,” explains Dr. Ralf Britz of the Senckenberg Natural History Collections in Dresden, and he continues, “We now applied new research methods to take a closer look at this fish, whose external appearance is reminiscent of a snakehead fish.”

Based on computer-tomographic, molecular-genetic, and morphological methods, Britz and his international colleagues were able to detect several significant differences between the Aenigmachanna and other snakehead fishes from the family Channidae. “The most striking features are the shortened swim bladder that terminates at the center of the body, and the lack of the accessory respiratory organ,” explains the biologist from Dresden, and he adds, “The morphological as well as the genetic differences are large enough to justify assigning Aenigmachanna gollum to its own new family Aenigmachannidae!”

In addition, the researchers state in their study that the slender, roughly ten-centimeter-long fish exhibits several rather primitive characteristics. These may be explained by the animal’s evolutionary history. The phylogenetic analysis shows that the new family and its sister group, the Channidae, separated at least 34 million years, and possibly as much as 109 million years, ago. “It seems plausible that the Aenigmachannidae represent an evolutionary lineage that survived the breakup of the supercontinent Gondwana about 100 million years ago and subsequently drifted north with the Indian subcontinent – therefore, these animals could be considered a ‘living fossil’ within the group of snakehead fishes,” adds Britz.

Yet, the fishes’ remarkable lifestyle may ultimately pose a threat to their survival. The two species in the newly described family live underground in aquifers, which consists of water-bearing laterite rock. “These groundwater reserves are tapped into by over six million private wells – and an increased water extraction would literally drain these bony fishes’ very basis of existence,” says Britz in conclusion. 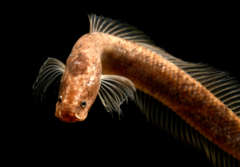 Newly discovered in Kerala in 2019, the snakehead fish Aenigmachanna gollum has been placed in the new family Aenigmachannidae.

These freshwater fishes dwell underground in the aquifer. Photo: Senckenberg/Britz