Markus Fischer
Senckenberg Center for Human Evolution and Palaeoenvironment at the University of Tübingen
markus_fischer@posteo.de

The Ups and Downs of a Mega-Lake

Hydrological studies at Lake Chew Bahir in East Africa, the “Cradle of Humankind”
Together with an international team, researchers of the Senckenberg Center for Human Evolution and Palaeoenvironment at the University of Tübingen reconstructed the 20,000-year-old history of the mega-lake Chew Bahir in a remote valley in Southern Ethiopia. Led by Annett Junginger, the scientists were able to show that the lake underwent rapid water level changes in the course of its history, which had a direct impact on the local population. The study was recently published in the journal “Frontiers in Earth Science.”

Water is mankind’s most important basic resource. From the beginning until today, humans of all cultures sought out settlements not far from the presence of clean drinking water – as has been the case for 20,000 years at what is now Lake Chew Bahir in Southern Ethiopia.
Currently, this lake is almost completely dry. “However, in the past, the lake often held an enormous volume of water and covered an area five times the size of Lake Constance,” explains Markus Fischer, the study’s lead author and a doctoral student at the University of Tübingen, and he continues, “Based on hydrological models and the lake’s sediments, we were able to document enormous, rapidly changing shifts in the sea level over the course of the lake’s history.”

The international research team’s modeling results and the lake sediments offer impressive evidence that the East African landscape repeatedly fluctuated between desert-like conditions and a gigantic lake; in many cases, the lake would dry out and refill with water within just a few decades. Rainfall during the frequently recurring wet phases was between 20 and 30 percent higher than today. “Those who grew up at a lake and possibly learned to fish there may have been confronted with a dried-out lakebed as adults,” adds Fisher.
Due to large gaps in the archeological data basis, it is mostly unknown how the past population reacted to the environmental changes. However, Fisher and his co-authors discuss the observation that settlement activities increased in the adjacent Ethiopian highlands during the rather brief drought periods of a few decades to a hundred years. “This could be an indication that the people of that time escaped to the cooler and wetter mountains and possibly were forced to change their way of procuring food at short notice. Once the conditions changed and a wetter climate prevailed, they were able to return to the lower areas in the Rift Valley with its extensive lakes,” explains Junginger.
According to the study, it would take several centuries of climatic instability toward an increasingly dry climate to effect radical cultural changes, causing a transition from a predominantly hunter-and-gatherer culture to sedentary animal husbandry. Environmental changes as a stress factor and the resulting migration could thus have served as a framework in which new behavioral strategies developed and prevailed.

In addition to the anthropological aspects, the study also provided insights into the highly sensitive climatic future of Southern Ethiopia. The new results clearly illustrate East Africa’s extreme susceptibility to environmental changes and the importance of the lakes in the East African Rift Valley as amplifiers of these climate signals. Present-day deserts were once extensive lakes, and even those lakes that still exist today could face pressure due to anthropogenic climate change. “The people in the early Holocene showed an impressive flexibility in their behavior and were able to adapt their lifestyle to the new environmental conditions. This gives me hope that we, in today’s so-called Anthropocene, will also manage to change our behavior and still be able to rein in the man-made environmental changes,” adds Fischer in closing.

The study is embedded in the International Joint Program “Hominin Sites and Paleolakes Drilling Project,” which aims to reconstruct the climate history over the course of human development in East Africa – the presumed “Cradle of Humankind.” By means of high-resolution analyses of lake sediment drill samples, the researchers explore the role of climate and the environment in regard to population development, evolution, and migration in the earliest prehistoric times. The study was funded by Baden-Wuerttemberg’s Ministry for Science, Research and the Arts and by the German Science Foundation, in cooperation with the participating universities in Tübingen, Leipzig, Cologne, and Potsdam, the DLR in Munich, and the University in Addis Ababa. 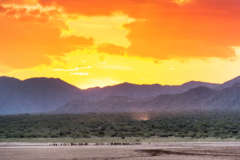 Lake Chew Bahir in Southern Ethiopia – currently, the lake is almost entirely dry, but in the past, it held a large volume of water. Photo: Senckenberg/Junginger 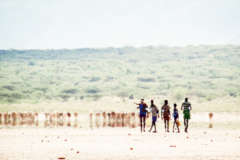 Present-day lakes in East Africa may disappear as a result of global climate change.
Photo: Senckenberg/Junginger