Virus-host on the advance

Frankfurt, 04.05.2021. Researchers from the LOEWE Centre for Translational Biodiversity Genomics (TBG) have sequenced the genome of a raccoon dog for the first time. Genetic data support its potential to transmit SARS-CoV-2. Being native to East Asia, racoon dogs have spread widely over Europe and are currently listed in as an invasive species in Germany. Raccoon dogs are closely related to foxes and known to carry various viruses that can be transferred to humans. The study suggests that the raccoon dog could also be a reservoir host for coronaviruses. The article has been published in the scientific journal “Frontiers in Genetics”.

“The raccoon dog is a host and vector for a variety of pathogens that can be dangerous to humans, their pets and livestock. These include rabies and canine distemper virus”, says Prof. Dr. Sven Klimpel of LOEWE TBG, the Senckenberg Biodiversity and Climate Research Center (SBiK-F), and Professor of Parasitology and Infection Biology at the Goethe University Frankfurt. “The raccoon dog is now widely distributed in Europe and will probably continue spreading. Analysing its genome, we know more now about its potential role in transmitting SARS-CoV-2.“

The genetic information, found in the nucleus of cells as DNA, has been extracted from blood and tissue samples of a racoon dog. The whole genome of the raccoon dog includes 2.39 billion nucleotide bases, the basic units of DNA strands. Extensive analyses at the laboratory as well as using high-performance computers at LOEWE TBG revealed the locations of genes and gave information on the proteins that might be synthesizes based on them.

“In the genome of the raccoon dog we found the genes of two proteins that can be used by SARS-CoV-2 for binding at a cell,” says Prof. Markus Pfenninger, molecular ecologist at LOEWE TBG and SBiK-F, and Professor of Molecular Ecology at University of Mainz. “The genetic information showed that raccoon dogs are likely susceptible to SARS-COV-2 and that they can potentially transmit it to other animals.“ The data also show that one of the raccoon dog’s membrane proteins binds with higher affinity to the spike protein of SARS-CoV-2 than membrane proteins in their relatives such as foxes and wolves, but also than bats, or Asian pangolins.

“Recently, bats and pangolins have been regarded as potential direct vectors of SARS-CoV-2 to humans,” Klimpel says. “Which animal host transferred the coronavirus ultimately to humans is still unresolved. However, our study shows that the raccoon dog is a suitable reservoir host for the coronavirus.”

Raccoon dog (Nyctereutes procyonoides) belong to the family of dogs and it is closely related to foxes. These omnivores resemble raccoons. They were originally introduced to Europe for hunting and fur breeding, where they became wide-spread in the 20th century. As competitors or predators they can disturb the populations of native species, such as ground-nesting birds. As disease vectors, they can represent a health risk for people who have close contact with animals.

Similar risks of invasive and alien predator species are being investigated by Prof. Sven Klimpel in the project “Zoonotic and ecological effects on wildlife of invasive carnivores (ZOWIAC)“, a joint project by Goethe University Frankfurt and the Senckenberg Society for Nature Research.

“The sequencing of the raccoon dog genome is just the beginning,” Klimpel explains. “We can now perform detailed analyses of how individual genes are related to the transmission of certain diseases. Our data can help to better understand the evolutionary history of dogs. For example, it is still unclear why the raccoon dog is the only canine species that hibernates.” The genome data is now publicly available in online databases to support research on this and similar questions. 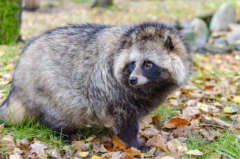