When the Atlantic met the Alps: West Winds Have Determined Central European Climate for 14.5 Million Years

German researchers have investigated the mid-Miocene Climatic Optimum in Central Europe between 17 and 14 million years ago. This warming period was followed by a global cooling, which took place much faster and more dramatically on land than in the ocean, the team reported recently in the Nature Group’s journal “Scientific Reports.” At the same time, a precipitation pattern established in Central Europe that is similar to the current pattern. This indicates that the westerly-dominated wind system, which is influenced primarily by the North Atlantic, has been established as one of the primary driving forces of the Central European climate from that time on, and thus three million years earlier than previously reported.

Crocodiles and chameleons lounging under palm trees in the foothills of the Alps – what appears like a fantasy today was actual reality 16 million years ago. At that time, Central Europe had a subtropical, humid climate with a mean annual temperature of up to 20 degrees Celsius and frequent precipitation. From a current perspective, this period, the mid-Miocene Climate Optimum, looks like an analogy for our future climate development. Previous research on marine sediments of that time has already revealed that the “eternal summer” of the middle Miocene came to an end after about two million years.

For the first time, Senckenberg researchers now offer proof that this end of the mid-Miocene Climate Optimum occurred much more dramatically on land than in the ocean. “Between 14.48 and 14.13 million years ago – i.e., a period of a mere 350,000 years – the temperature decreased rapidly. Geologically, this is an extremely short time for such a drastic temperature drop. Based on marine sediments, we know that the ocean cooled down much more slowly and stepwise by no more than one to six degrees,” explains Dr. Katharina Methner, a researcher at the German Senckenberg Biodiversity and Climate Research Centre.

The heat anomaly during the middle Miocene and its rapid end in Central Europe left its footprint in carbonates, which formed in the soil at that time. These “fossil soils” are nowadays to be found in the sedimentary record of the North Alpine Foreland Basin in Switzerland were they were sampled by Methner and her team. Later on, in the laboratory, the geoscientists used geochemical methods based on carbon and oxygen isotopes in the soil carbonate to reconstruct the temperatures of the soils during carbonate formation. “Using isotope geochemistry, we can conclude from these carbonates that the temperatures in the Alpine foreland during the mid-Miocene Climate Optimum were highly dynamic“, says Prof. Dr. Andreas Mulch of the Senckenberg Biodiversity and Climate Research Centre and Frankfurt’s Goethe University.

Surprisingly, the results also reveal that in addition to temperature, rainfall seasonality must also have undergone drastic changes around 14.5 million years ago. During the cooling period, Central Europe generally became much drier. Moreover, the amount of rainfall during the different seasons changed. Presumably, most of the rain in Central Europe now fell during the summer, as it does today. “This indicates a strong impact of the North Atlantic on Central Europe climate. The current westerly-dominated wind system obviously set in as early as 14.5 million years ago, which would be three million years earlier than previously reported,” explains Methner, and she adds, “Overall, the results confirm how sensitive the climate system reacts as a whole. We cannot consider temperature without precipitation, the terrestrial climate without the marine climate, or Central Europe without the North Atlantic, and thus without the global climate!”

With high carbon dioxide levels, a high sea level, and a reduced occurrence of sea ice, the mid Miocene Climate Optimum shows clear parallels to the climate change we are facing today. Nevertheless, compared to other warming periods in Earth’s history, the information about it and its end are sparse to date. Methner concludes, “Climate change in the form of temperature and precipitation changes has occurred repeatedly during the geological past. To assess what the future holds, we need a better understanding of the dynamics and drivers behind these changes. With our findings, we make a further step towards this ultimate goal.” 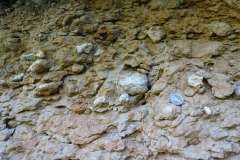 Researchers used carbonates which were formed 14 to 18 million years ago to gain insights into the Miocene climate dynamics in Europe. Copyright: Katharina Methner 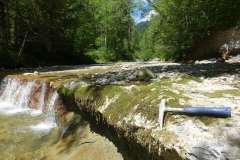 The carbonates analyzed as part of the study were sampled at the Swiss river Fontannen in Canton Luzern. Copyright: Katharina Methner