A Miniature Pelagornithid from the Giant Penguin fossil site

Together with researchers from New Zealand, Senckenberg scientist Gerald Mayr described a new pelagornithid species. With an age of 61 million years, the fossil is the oldest and also the smallest representative of this group of birds, which includes species with a wingspan of more than 5 meters. The new species, described as Protodontopteryx ruthae, was discovered at a fossil site in New Zealand and represents the oldest record of a pelagornithid bird from the Southern Hemisphere. The fossil bird was no larger than a modern gull and is one of the most basal representatives of this highly specialized avian group. Contrary to previously described pelagornithids, the new species probably did not soar over long distances and presumably fed on fish. The study appears today in the scientific journal “Papers in Palaeontology.”

Ragged protrusions along the beak’s edges are the characteristic trait of pelagornithids (also known as false-toothed birds). Instead of teeth, the jaws of these long-billed birds were equipped with hollow, bony spikes of different lengths that aided in grasping prey.

“These unusual seabirds occurred over a period of about 55 million years until the end of the Pliocene around 2.5 million years ago,” explains Dr. Gerald Mayr of the Senckenberg Research Institute and Natural History Museum in Frankfurt. Fossils are well known from younger geological layers, and besides their exceptional beak, pelagornithids are also characterized by their extremely long and thin wing bones. However, little was known to date about these birds’ evolution, and all previous specimens share the same, highly specialized morphology.

Together with Prof. Paul Scofield and Dr. Vanesa De Pietri of the Canterbury Museum in New Zealand, Mayr now described a new species of pelagornithid from a fossil site along the Waipara River in North Canterbury (New Zealand). These marine sediments from the Paleocene epoch are famous for the oldest penguin fossils, including a recently discovered species of giant penguin.
“The new pelagornithid fossil possesses the characteristic pseudoteeth, but the remainder of the skeleton differs dramatically from its highly specialized relatives,” explains the ornithologist from Frankfurt, and he continues, “Moreover, the almost complete skeleton described by us as Protodontopteryx ruthae is markedly smaller than all hitherto known representatives of the pelagornithids. While the Miocene species Pelagornis chilensis reached a wingspan of more than 5 meters, which made it an ideal soarer, the newly discovered species was only about as large as a medium-sized gull.”

In addition, the fossil – which was recovered a year ago by New Zealand fossil collector Leigh Love and named after his wife, Ruth – differs from its relatives by the shorter and broader “pseudoteeth.” Therefore, the researchers assume that, contrary to geologically younger pelagornithids, this small seabird did not feed on squid but primarily on fish.

“The newly found specimen is the oldest and phylogenetically most basal fossil to date. Although most of the previous finds were made in the Northern Hemisphere, we assume that these seabirds originated in the Southern Hemisphere,” adds Mayr in closing. 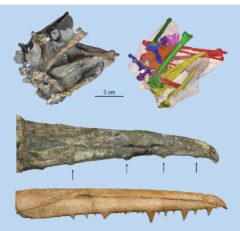 Top: The piece of rock containing the bones of the new species, and a computer-tomographic image with the individual bones highlighted in different colors (yellow: skull and beak).
Bottom: The beak of the new species in comparison to that of a Miocene pelagornithid (Pelagornis miocaenus). The arrows indicate the pseudoteeth of Protodontopteryx ruthae. 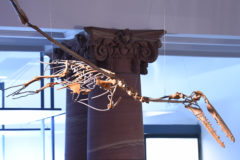 This reconstruction of a gigantic relative of the newly discovered species – Pelagornis chilensis – is on display at the Senckenberg Natural History Museum. 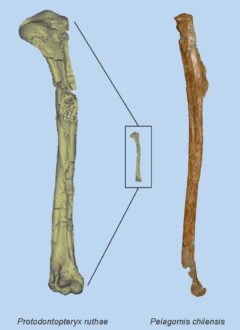 The humerus  of the new speciesin comparison to that of a very large Miocene pelagornithid (Pelagornis miocaenus). The framed box shows the bone at the actual scale; on the left, it has been adjusted to the same size. 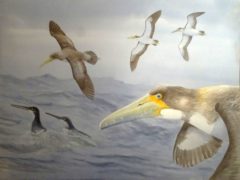 This is what Protodontopteryx ruthae may have looked like. In the water are two of the recently described giant penguins.