Back in the wetlands

Frankfurt, 27.09.2022 From the zoo to the wild – this is the path taken by a total of 650 European pond turtles in the German-French border area between Neuburg am Rhein and Lauterbourg over the past ten years. The last group was released into their natural habitat in the Woerr bioreserve in Alsace in mid-September 2022 – to be closely monitored there in the coming years. The aim of the action is to reintroduce the species, which according to the Red List is threatened with extinction, in a restored wetland. Since 2022, a new scientific framework has been provided by the large-scale European research project Emys-R, headed by Dr Kathrin Theissinger, a scientist at the Senckenberg Society for Nature Research and the Hessian LOEWE Centre for Translational Biodiversity Genomics (LOEWE-TBG). In addition to ecological aspects, the focus there is also on societal aspects.

In Europe, the European pond turtle (Emys orbicularis) is the only naturally occurring turtle species in freshwater. So, the released reptiles seem to feel comfortable in their new home – but they do not remain unobserved in the shallow water of the Alsatian nature reserve: the movement radius and population development are precisely documented in monthly studies from April to September before the turtles dive into hibernation. For the movement analyses, the animals are equipped with microchips. Faecal samples are also taken to draw conclusions about their diet through genomic analyses in the LOEWE-TBG laboratories. In parallel, water samples are analysed: The so-called metabarcoding of environmental DNA (eDNA) makes it possible to record the entire biodiversity of the renaturalised waters. Based on the genomic comparison of faeces and water, the potential food supply can then be matched with the food actually consumed by the turtles. The results provide information on how the return of the reptiles to the Upper Rhine floodplains affects the species diversity there.

The black turtle with yellow spots on its skin, which can grow up to 20 centimetres and live for a good 80 years, is almost extinct: In Europe, where around 90 percent of the wetlands have disappeared since the 18th century, it has suffered the greatest decline of all reptiles. Yet this well-studied omnivore plays a central role in the balance of aquatic ecosystems. Therefore, it is also considered an umbrella species for biodiversity: if the European pond turtle is preserved, other species will also benefit. This is in line with the approach of the Emys-R project. The action-oriented, participatory research project aims to identify the most effective ecological methods that contribute to the restoration of wetlands and the reintroduction of the European pond turtle, thereby also strengthening local biodiversity. It is important to the researchers involved that the corresponding measures are also supported by the population.

“In our project, we are evaluating the effects of reintroduction on the ecosystem and thus the general relevance of such conservation measures. In parallel, we are using surveys to investigate how the conservation measures are perceived by the population. With this transdisciplinary approach, we want to find out whether the pond turtle, as an ambassador for wetlands, can ensure that the population reconnects more strongly with nature – and specifically with the wetland ecosystem, which is so important for biodiversity,” explains Senckenberg and LOEWE-TBG researcher Dr Kathrin Theissinger, project manager of Emys-R. “To this end, we are bringing together researchers from all over Europe and their previous methods and experiences in the new research network.”

Theissinger is leading the project together with Dr Jean-Yves Georges from the Institut Pluridisciplinaire Hubert Curien (IPHC) at the Centre National de la Recherche Scientifique (CNRS) in Strasbourg. The two researchers have been working together on transboundary turtle monitoring for four years. Johannes Meka, who also works at Senckenberg and LOEWE-TBG, has also been involved since this year. In his dissertation, he is investigating the development of turtle populations and food networks. “Using eDNA, we are examining all the new water bodies created especially for this reintroduction between the release sites, which are five kilometres apart, to determine which pools are used by the turtles for their further dispersal. This year, for the first time, we discovered a turtle from Germany in Alsace. This is a great success for the overall project,” says Meka.
To be able to analyse the reintroduction from the different perspectives, numerous partners from natural science, humanities and social science institutions are participating, as well as zoos where the turtles are bred as part of the European Endangered Species Breeding Programme (EEP). The Emys-R project, which was acquired by Theissinger, will be financed from 2022 to 2025 with a sum of one million euros as part of the EU call for proposals “BiodivERsA – BiodivRestore”.


The LOEWE Centre for Translational Biodiversity Genomics (TBG) is a joint research institution of the Senckenberg Society for Nature Research, the Goethe University Frankfurt, the Justus Liebig University Gießen and the Fraunhofer Institute for Molecular Biology and Applied Ecology IME. Further partners are the Fraunhofer Institute for Translational Medicine and Pharmacology ITMP and the Max Planck Institute for Terrestrial Microbiology. Central focus of the centre is on expanding biodiversity research into the genomic basis of biological diversity. The aim is also to combine basic research on the genomes of a broad variety of organisms with the development of applicable services and products. The centre is funded by the Hessian State Initiative for the Development of Scientific and Economic Excellence, called LOEWE.
Further information: https://tbg.senckenberg.de 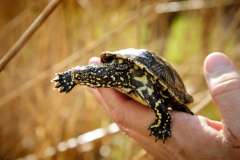 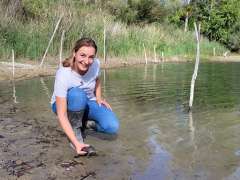