Frankfurt, 03/30/2021. The identification book “A Field Guide to Bushcrickets, Wetas and Raspy Crickets of Tanzania and Kenya” comes out in print today. The author, Senckenberg scientist Dr. Claudia Hemp, covers 270 grasshopper species from Tanzania and Kenya in this new guide. More than 1100 photos, 45 identification keys, over 60 distribution maps, and a DVD with recordings of calling songs an impressive overview of the enormous diversity of this interesting group of insects in East Africa.

Traditionally, grasshoppers have always had a bad reputation: the biblical image of swarms of pests destroying crops, especially in African countries, is still widespread. In fact, this prejudice applies to only a few species of grasshoppers (Orthoptera). Many species in this small insect group are actually very valuable to biologists since they serve as important indicators due to their diverse habitats. “Numerous grasshopper species inhabit narrow ecological niches and are sensitive to changes in their habitat,” explains biologist Dr. Claudia Hemp of the Senckenberg Research Institute and Natural History Museum in Frankfurt, and she continues, “Thus, they serve as so-called bioindicators for forests, among other things – their presence or absence provides information about habitat quality.” With her field guide, Hemp provides an important inventory of the various species and their habitats in East Africa. Many of the grasshopper species native to East Africa are now considered threatened. The rapidly growing human population is degrading East Africa’s pristine habitats through deforestation, slash-and-burn agriculture, and the use of hillsides for grazing.

The Senckenberg book compiles information on habitats, bioacoustics, and relationships of a total of 270 grasshopper species in East Africa. Each species is described morphologically and recorded in detail by means of distribution maps – the photographic illustrations throughout the book reflect the fascinating diversity of their appearance. “Grasshoppers have developed interesting adaptations in terms of their body shape and coloration,” explains Hemp. For example, some species change their shape dramatically as they grow from larvae into adults. “They may resemble an ant after hatching, mimic a venomous beetle, or later evolve into a well-camouflaged animal,” adds the author.

Another highlight of this publication is the enclosed DVD. It contains the calling songs of 185 Orthoptera species. Here, too, the variety is astonishing: most grasshoppers produce calling songs that vary from very loud to soft, are monotonous, or consist of different parts recognizable to the human ear. Some, on the other hand, can only be heard with the aid of an ultrasonic detector.

Hemp has been enthusiastic about grasshoppers ever since her teenage years. “I observed grasshoppers in Upper Franconia, where their various songs are the epitome of summer. Later, I had the opportunity to start studying orthopterans in Africa – so this book is the result of a lifelong enthusiasm.” She hopes that her work can contribute to the conservation of this group of insects. After all, many of the grasshopper species – even if they have just been newly described – are already on the brink of extinction.

Dr. Claudia Hemp has been living and researching in East Africa for more than 30 years. She is concerned with speciation processes in orthopterans, their taxonomy, ecology, biology, and biogeography. Since 2001, she has described 200 new species, 17 genera, and one subtribe from East Africa. Since 2020, she works as the project coordinator in Tanzania for the DFG project “Kili-SES,” which analyzes the interactions of humans and nature on Kilimanjaro.

We will gladly send you review copies; please mail a request to pressestelle@senckenberg.de. The author is available for interviews and questions.

with contributions from Andreas Hemp and Klaus-Gerhard Heller

A Field Guide to the Bushcrickets, Wetas and Raspy Crickets of Tanzania and Kenya 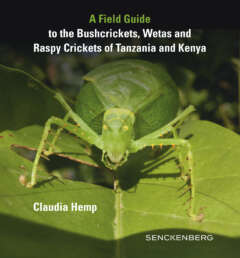 with contributions from Andreas Hemp and Klaus-Gerhard Heller

A Field Guide to the Bushcrickets, Wetas and Raspy Crickets of Tanzania and Kenya 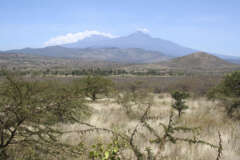 A savanna forest at Kilimanjaro – a characteristic habitat of many grasshopper species. Photo: Claudia Hemp 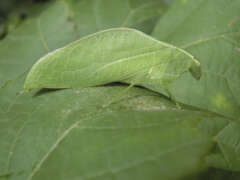 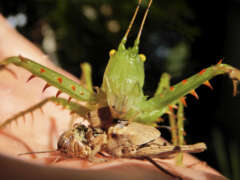 The female (Aerotegmina vociferator) in this photo defends a Morphacris nymph by lifting its front legs.