On the Brink: Brazil’s Coastal Rainforest

Amphibian and bird diversity threatened by deforestation and eucalyptus monocultures

Together with Brazilian colleagues, Senckenberg scientist Raffael Ernst investigated the impact of current land use on the bird and amphibian fauna of the Atlantic rainforest in southeastern Brazil. In their study, published in the journal “Biological Conservation,” the team shows that afforestation with eucalyptus monocultures leads to a change in species composition and favors alien species.  According to the researchers, the “critical environmental thresholds” established to date beyond which negative changes occur in the forest ecosystem are set too high.

The Atlantic rainforest in southeastern Brazil is subject to intense human-induced pressure: according to estimates, only between 11 and 16 percent of the original forest area remains intact. Since the 1970s, eucalyptus monocultures have been increasingly planted on the cleared areas here.

“Nearly 72 percent of Brazil’s population lives along the geographic boundaries of this area and is heavily dependent on the ecosystem services provided there,” explains Dr. habil. Raffael Ernst of the Senckenberg Natural History Collections in Dresden, and he continues, “The degradation of this landscape is therefore extremely alarming. Especially in view of the fact that Brazil’s president Bolsonaro has just cut the country’s budget for environmental protection by almost a quarter.”

Together with Brazilian scientists, Ernst analyzed the current land use in the Atlantic rainforest and its impact on the amphibian and bird communities, using 47 different sampling areas northeast of São Paulo. The team studied eight environmental parameters to examine when “thresholds” for an undisturbed ecosystem are exceeded.  “Our study shows that thresholds have been set far too high to date – current land use is already noticeably altering species compositions in the groups of organisms we studied. Specifically, massive afforestation with eucalyptus is causing alien species such as the American bullfrog to expand, while native species and also those that perform important ecosystem functions, e.g., due to their function as seed dispersers, are disappearing.”

The team uses its data to show that amphibian communities already start to change when less than 10 percent of their habitat is planted with eucalyptus. Species composition in birds changes once 20 percent of the original forest area is lost. “Frogs and their relatives are affected comparatively faster, because they are less mobile and therefore unable to find a new habitat as easily,” adds the herpetologist from Dresden.

However, the researchers also show that species do not simply go extinct, but rather that novel species communities emerge – although little is known yet about their functional importance for the ecosystem.

Ernst summarizes, “The current Brazilian environmental policy leads to the fact that this unique ecosystem of vital importance will be subject to profound and irreversible changes in the long term – the consequences for humans and nature are difficult to predict in this regard. We therefore urge to redefine the environmental thresholds in order to protect these valuable areas!” 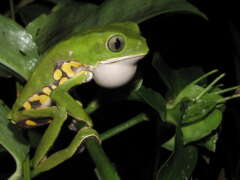 Phyllomedusa burmeisteri – one of the many species of frogs native to the Atlantic rainforest. Photo: J.V. Lacerda 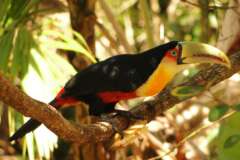 Birds such as the green-billed toucan (Ramphastos dicolorus) are also severely impacted by land use changes in Brazil. Photo: C.O. Gussoni 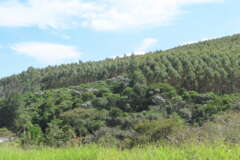 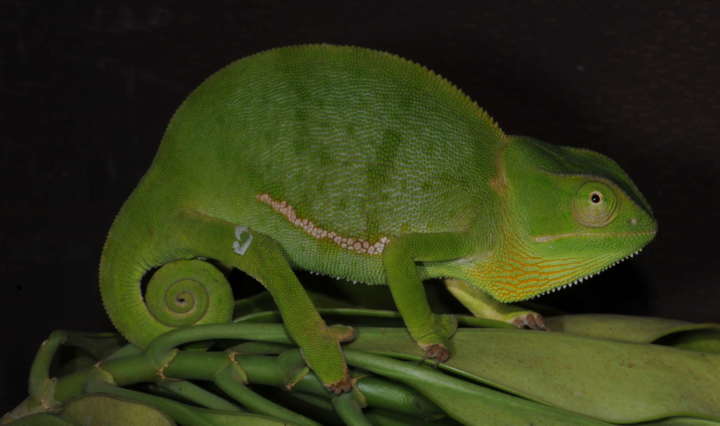