Transparent Fish without a Skull Roof

Senckenberg scientist Ralf Britz has joined forces with US researchers Kevin Conway and Kole Kubicek, Texas A&M, to study the evolutionary skeletal development of Danionella dracula, a tiny, transparent fish. The fish lacks several bones – including the skull roof – and at the same time possesses highly specialized organs for communication. Because of these features, Danionella is currently becoming an important model organism in neurophysiological research. The study was recently published in the journal “Developmental Dynamics,” where it is featured on the cover.

What could be more suitable for neurophysiological vertebrate research than an organism whose skull is transparent and thus provides a view of its brain in a living state? The species of the genus Danionella meet these requirements perfectly – they are less than 11 to 17 millimeters in size and part of the carp family, and include Danionella dracula, the subject of this study, which was discovered and described as recently as 2009 –.

“The dwarf-like fish is transparent and lacks a skull roof, allowing the study of the brain in the living animal,” explains Dr. Ralf Britz of the Senckenberg Natural History Collections in Dresden, and he continues, “The miniaturization of Danionella and the absence of many bones, including those that normally cover the brain, are a consequence of what we call heterochrony, a term coined by German zoologist Ernst Haeckel.”

When the temporal sequence of developmental steps in the process of evolution changes, the beginning or end of a developmental process may shift, or the speed of such a process may change. In Danionella dracula, this heterochrony leads, among other things, to an acceleration of sexual maturity, so that these fishes – although resembling larvae anatomically – are mature at about 10 millimeters in length and are able to reproduce.

Using a series of 43 stages of this species, Britz, along with the study’s lead author, Kevin Conway, and his colleague, Kole Kubicek of Texas A&M University, studied the development of the animals from newly hatched, 3.4-millimeter-long larvae to adults with a length of 16 millimeters.

“We were able to show that the fishes are missing more than 40 bones compared to their close relative, the zebrafish Danio rerio!” explains Britz, and he adds, “In contrast, other parts of their skeleton are exceptionally well developed. Of particular significance in this respect is the ‘Weberian apparatus,’ which is responsible for the animals’ intraspecific communication.”

With the aid of three small bones that resemble the middle ear ossicles in humans, the “Weberian apparatus” increases the fish’s hearing ability and transmits sound waves from the swim bladder to its inner ear. However, male Danionella also use this auditory apparatus to produce various sounds with amplitudes of 140 decibels and 60 to 120 hertz to communicate with their conspecifics. “This particular part of the skeleton of Danionella developed not just normally, but rather at an accelerated speed during development,” adds the ichthyologist from Dresden. The animal thus combines both the characteristics of a larval zebrafish – a small brain, lack of skull bones and pigmentation of the skin – as well as the neuronal complexity of adult animals in terms of hearing and intraspecific communication.

“This enormous difference in the developmental speed of different organ systems within one and the same organism is very unusual for vertebrates. It is precisely this anatomical outcome – larval and yet highly specialized – that has made Danionella a model animal for neurophysiology,” adds Britz in summary. 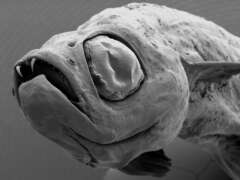 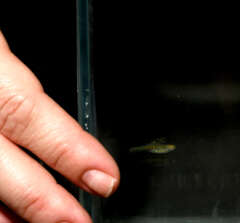 The fish Danionella dracula, about as long as a fingernail, is an ideal model organism for neurophysiological vertebrate research. Photo: Kevin Conway 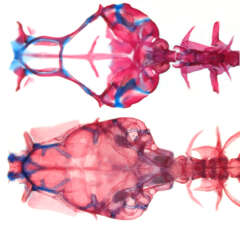 Comparison of the open skull roof of Danionella (above) and the closed roof in zebrafish Danio (below). Photo: Kevin Conway

The Gollum Snakehead gets its own fish family

The subterranean bony fish is classified in its own new family